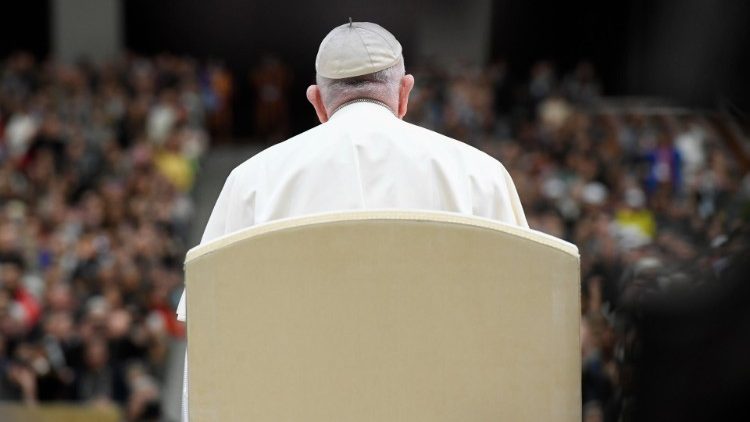 Italian psychologist Salvo Noé has interviewed Pope Francis for his book entitled “La paura come dono” (“Fear as a Gift”), to be released in Italian on January 25 by Edizioni San Paolo. The Pope speaks about his thoughts, fears, and feelings during the years of his pontificate, starting with his election in the 2013 conclave.

A new book interview in Italian with Pope Francis, entitled La paura come dono (“Fear as a Gift”), will be released by Edizioni San Paolo on January 25. The author, Italian psychologist and psychotherapist Salvo Noé, conducted a lengthy interview with Pope Francis, looking at a host of topics over the nearly ten years of Pope Francis’ pontificate.

Regarding decision-making, the Pope says “sometimes yes, when I have to make a decision, I say to myself, ‘If I do this like this…?’ And that’s a little bit of fear of making a mistake, isn’t it? And fear in this case helps me, because it leads me to weigh carefully the decisions to be taken, how to do carry them out and everything else. It is not fear that overtakes me, no, no. It is a feeling that makes me proceed carefully: fear can be like a mother who warns you.”

Doctor Noé met with Pope Francis at Santa Marta, where the Pope resides, and told Vatican News that “in one of the many meetings, I told the Holy Father about my wish to write a book on fear, asking him if he would like to offer his own contribution to it. As usual, he said yes; and so, on a January afternoon, with my recorder in hand, I asked some questions that the Pope answered with his usual calm and reassuring voice. He also asked me some questions about fear and so ours became a conversation full of food for thought.” The long conversation then covered a wide range of topics, ranging from seminary formation, the challenge presented by hypocrisy, worldliness, careerism, welcoming homosexuals and migrants, and preventing clergy abuse by perhaps introducing psychological reviews in seminaries.

Regarding the process of discerning a vocation to the priesthood, the Pope responds that “it is necessary to evaluate in an integral way how one is living, the psychological dimension, the interpersonal relationships of the one who wishes to embark on the path to priesthood by entering the seminary.” “It is better to lose a vocation than to take a risk with an unsafe candidate,” he affirms. For the Pope, the use of psychology in seminaries can be “very useful,” as “the sexual abuse of minors by clergy has dramatically highlighted this problem.”

The interview also dwells on the subject of persons with homosexual tendencies: “God is Father and does not deny any of His children,” the Pope says. “And God’s style is closeness, mercy, and tenderness. Not judgment and marginalization. God draws near with love to each of His children, to each and every one of them. His heart is open to each and every one. He is Father. Love does not divide, but unites.”

Continuing on the subject of welcome, Pope Francis also mentions an issue dear to him, that of migrants, who he says are often used as a reason to “to make people afraid, to have them believe that our problems arise from (migration).” Instead, our problems “arise from the lack of higher values, from the disorganized way of living in our homes and in our cities, from the emptiness of faith that distances us from one another and does not allow us brotherhood.”

In a similar way, Pope Francis reiterates his call to “adopt an environmentally respectful lifestyle to safeguard the heritage of creation and to protect the lives of those who inhabit the planet.” “Our planet is sick,” he says, “and it is mistreated and plundered,” the consequence of “a way of life dominated by selfishness and a culture of waste, and it has placed before us an alternative: to continue on the road traveled so far or to embark on a new path.” What is needed, he says, is an “ecological conversion,” a “change in direction… where we assume responsibility, committing to care for our common home.”

Pope Francis and Dr. Noé reflect at length on the topic of fear, the central theme of the book. “Excessive fear can hurt, weaken . . . and paralyze us, so much so that a person overcome by fear does not move, does not know what to do. . .” the Pope notes. “Excessive fear, in fact, is not a Christian attitude, but it is an attitude, we can say, of an imprisoned soul, [a soul] without freedom, which has no freedom to look forward, to create something, to do good.”

Hypocrisy is not Christian either, the Pope adds. “It is fear of the truth,” he explains, and the Church is not immune from it. “A hypocrite fears the truth. One prefers to pretend rather than be oneself. It is like gambling with your soul. Pretending destroys the courage to tell the truth openly, and so one easily does away with the obligation to tell the truth always, everywhere, and in spite of everything.” “There are many situations where this happens: it is hidden in the workplace, where one tries to appear friendly with colleagues while competition leads to striking behind their backs; in politics, it is not unusual to find hypocrites who have split public and private lives.” However, the Pope stressed, “it is particularly detestable to find hypocrisy in the Church. Unfortunately, it exists and there are many hypocritical Christians and ministers. We should never forget the Lord’s words, ‘Let your speech be yes, yes, no, no.’ Anything more comes from the Evil One.”

From reflections, the book moves to historical events, going back to the day of the election and the “welcoming and simple” way the new Pope presented himself to the world, as Dr. Noé says, that “won the hearts of so many.” “I did not expect to be elected, but I never lost my peace. I had brought a small briefcase, convinced I was going back to Buenos Aires, in time for Palm Sunday. I had left the homilies there prepared. Instead, I stayed in Rome,” Pope Francis explains in the book. He recalls Cardinal Claudio Hummes telling him not to forget the poor, and also his reassurance, “Don’t worry, that’s how the Holy Spirit does it,” when faced with the surprised expression of the newly elected Pope. “I felt a peace and tranquility, even in the key choices; for example, I did not want to wear anything, only the white papal cassock. Even the shoes I did not want to wear. I already had the shoes and I just wanted to be normal. Then I went out and said good evening.”

Pope Francis once again spoke about his longing to be able to walk the streets as he used to Argentina, meeting people, talking with them, and hearing about their stories, difficulties, and situations: “I have to stick with security protocols. Here they are afraid that something might happen to me.” It is another fear, although in this case it is justified, he acknowledges. “The first few times, as soon as I was elected, I tried to go out a few times without warning, and I created serious problems for the people who work to ensure my security,” the Pope reveals.

Regarding his choice to live at the Santa Marta guesthouse in the Vatican, where he eats in a common dining room and shares his table with other people, Dr. Noé asks if this decision was influenced by any kind of fear. “Yes,” Pope Francis replies, “I chose to live at Santa Marta, rather than the historic papal apartments in the Apostolic Palace, because, as you can understand, I need to meet people, to talk, and here I feel freer. There I felt closed in, and that made me afraid. Each of us has to know ourselves to find the best solutions to our issues. When I was brought to the Apostolic Palace as soon as I was elected, I saw a very big bedroom, a big bathroom, and a (type of) funnel effect. Big rooms but a small entrance, where only very few staff can enter. So I thought, I need to accept if I can’t go out and walk around outside the Vatican, but I want to at least meet people. That’s why I chose Santa Marta. I wanted to break this habit of a pope being isolated.”

Closeness, an antidote to fear

On the other hand, “closeness to people, being able to interact with each other, doing things together is the real antidote to fear,” Pope Francis points out. “Many times, isolation, feeling wrong, having problems and not finding help, can result in a crisis that can turn into mental distress. My work is full of people who feel lonely and terribly far from ‘home.’ Loneliness is the real evil of our society. Everyone connected with cellphones, but disconnected with reality.”

Worldliness, a perversion in the Church

Finally, Pope Francis offers reassurance about the future: “Jesus is always at our side.” He calls on the faithful to “live with love, knowing how to entrust ourselves to the Father.” And he once again appeals to all priests to show “mercy, courage, and open doors.” “Today,” he says, “the greatest perversion in the Church is that of priests who are ‘climbers’ and worldliness. Worldliness can lead to vanity, arrogance, and pride. Worldliness kills, as I once said; a worldly priest is a clericalized pagan. The faithful need to see that we are like them, that we have the same fears and desires to live in God’s grace. And bring believers and nonbelievers together and talk with an open heart. This we all need to do.”