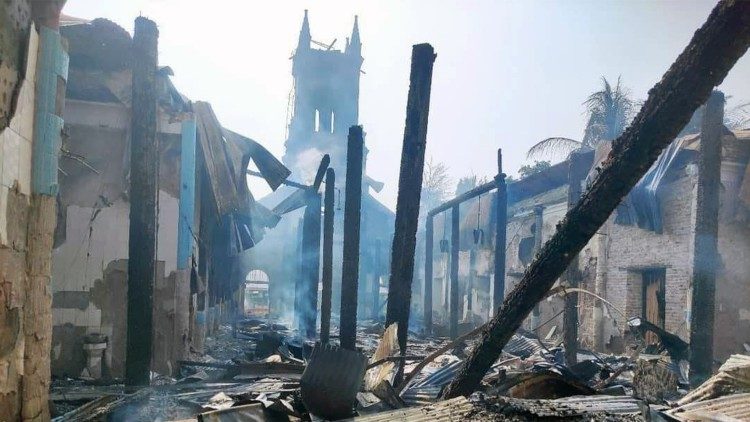 The Metropolitan Archbishops of Myanmar – Cardinal Charles Bo of Yangon, Archbishop Marco Tin Wan of Mandalay, and Archbishop Basilio Athai of Taunggyi – have issued a passionate appeal for peace in the country, insisting that “all of us need to undertake the pilgrimage of peace.”

Religious leaders in Myanmar (also known as Burma), have launched a “passionate appeal for peace, urging that all of us need to undertake the pilgrimage of peace.”

The appeal, signed by the three Metropolitan Archbishops of the country, recalls the “great threats to the sacredness of human life, the lives lost, the lives displaced, and the lives under starvation.”

The southeast Asian nation has suffered a series of political, social, and economic crises, and has descended into a spiral of violence since the 2021 military coup that overthrew the democratically elected government. Thousands of people have subsequently been arrested or killed without cause.

“In a great country blessed with so many resources, the destruction of lives is a heart-wrenching tragedy.”

Moreover, the appeal notes that “places of worship and monasteries, where communities sought peace and reconciliation are themselves increasingly under attack.” Just last week, Burmese soldiers burned the historic Church of the Assumption in Char Tan to the ground; only the Adoration chapel was spared by the flames. A nearby convent housing Franciscan sisters was also set ablaze.

“International instruments like the Hague Convention call for the protection of places of worship, places of learning, and places of healing,” the Archbishops note, asking, “with pain and anguish… why these sacred places are attacked and destroyed?”

They insist that places of worship promote the interdependence and sense of interrelatedness that are necessary for the nation to heal, and lament that “when they are mercilessly burnt, returning to normalcy becomes a great challenge.”

Arguing that “we have suffered enough as a people,” the Archbishops, “as leaders of various faith traditions,” plead with all stakeholders in Myanmar: “Let all guns fall silent, let us reach out to all, as brothers and sisters, and start the sacred pilgrimage of peace – united as a nation and as a people.”

“Peace is possible, peace is the only way.”

Ecumenical leaders to South Sudan’s rulers: Peace is in your hands

Pope Francis arrives in the Democratic Republic of Congo