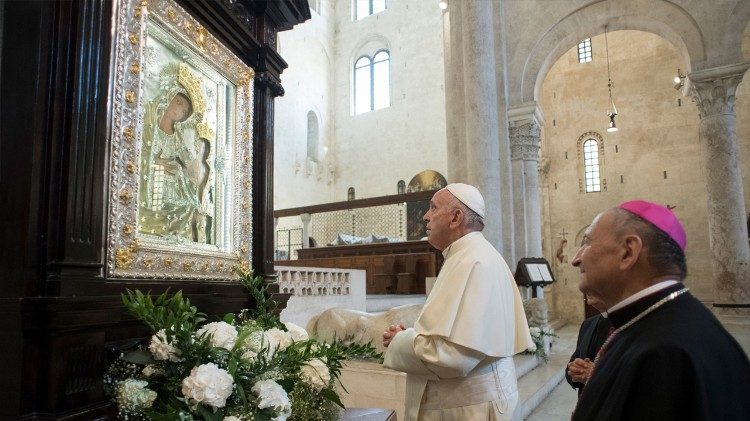 Pope Francis on Sunday expressed his appreciation for his visit a day before to the Italian city of Bari, where he prayed for peace in the Middle East.

The Pope was accompanied during this “special day of prayer and peace in that region” by Patriarchs of Churches of the Middle East and their representatives.

“I give thanks to God for this meeting, which was an eloquent sign of Christian unity, and saw the enthusiastic participation of God’s people.”

Pope Francis once again thanked his “Brother Heads of Churches”, their representatives, and Archbishop Francesco Cacucci of Bari for his welcome. The Holy Father said he was “edified by their attitude and witness.”

Finally, the Holy Father thanked the many faithful who accompanied and supported the Pope and the Patriarchs “through their prayer and joyful presence”.

Pope Francis on Saturday hosted an ecumenical reflection and prayer meeting in the southern Italian city of Bari for peace in the Middle East.

Nineteen heads and representatives of Christian Churches prayed with the Holy Father and held a closed-door dialogue with him in the Pontifical Basilica of St. Nicholas.

The Pope also took time to venerate the relics of St. Nicholas, a saint who recalls a time before the Great Schism of 1054 that split the Eastern and Western Churches.

At the prayer meeting, Pope Francis denounced the “murderous indifference” and “complicit silence” of the world regarding the tragedy taking place in the Middle East.