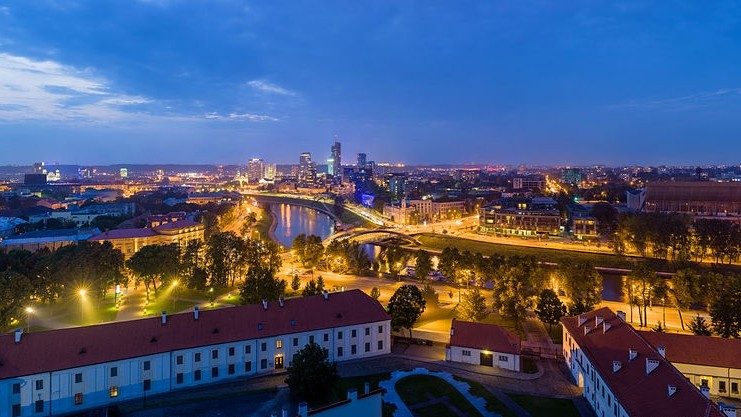 Pope Francis is scheduled to undertake an apostolic journey to three Baltic nations from the 22nd to 25th of September when he will visit the cities of Vilnius and Kaunas in Lithuania, Riga and Aglona in Latvia and Tallinn in Estonia.

The Pope’s visit  marks the first papal trip to the countries in a quarter of a century.

He will be the second pope to travel to the Baltic States, exactly 25 years after St. Pope John Paul II, who visited the three countries in September 1993.

The theme for his visit to Lithuania is “Christ Jesus – Our Hope.”

Archbishop Gintaras Grušas of Vilnius in Lithuania spoke to Vatican News about the relationship in his country between the Catholic Church and the State, about the hopes of the faithful and preparations for the papal visit, and said that he sees “the finger of God” in making it happen:

“I see the finger of God” in making this visit happen, said Archbishop Grušas as well as the direction that Pope Francis takes in general, a direction that is oriented towards the peripheries – be they social, economic, existential or geographic – and these countries, he said are on the periphery of Europe.

The ecumenism of martyrdom

Grušas also pointed out that Francis is interested in the ecumenism of martyrdom as demonstrated by his visit to Albania, and said that Lithuania has a history of martyrdom, as well as being a nation where issues such as migration and human trafficking affect contemporary society.
Anniversaries

Remarking on the fact that Pope Francis does not generally travel to celebrate anniversaries, Grušas said that “through a happy coincidence” he comes to Lithuania as the nation celebrates 100 years of independence and the 25th anniversary of the visit of Pope Saint John Paul II.
“Divine providence has delivered a great gift” he said.

State of the Catholic Church

He said it is rebuilding “buildings, structures, organizations” but is increasingly faced with the challenges of contemporary western society.
He noted that people who are still recuperating from 50 years of occupation are facing new challenges and that the Church provides assistance.

Regarding the main priorities of pastoral ministry Grušas said they are those of the Universal Church, namely the family and youth.

He also pointed out that Vilnius is a University city and that about 20% of the population is associated with colleges and universities which means that the Church is heavily involved in university ministry.

Noting that the roots of Divine Mercy devotion are in Lithuania, Grušas said that it disappeared for 50 years and even after it came back to Lithuania, it was probably better known outside.
But now, he said “We are experiencing a growing number of pilgrims coming from all over the world to visit and pray and visit the Shrine of Divine Mercy”.

Relationship between Church and State

Describing the state of the relationship between the Catholic Church and the State as a very good one, Grušas explained that after independence the state recognized the role played by the Church during the occupation in “preserving both faith and the hope for freedom: that was valued by the people and by the Government”.

Then, he said, “Pope John Paul II‘s visit in 1993 put that relationship on a completely new level: it was the first time government officials worked hand-in-hand and side-by-side with church officials. A new respect was born”.

“Following that visit, four accords were signed between the Holy See and the Republic of Lithuania” he said adding that today there is a very good working relationship between the State and the Church.

“The first preparation is prayer” Grušas said explaining that prayers are requested every Sunday after Mass.
“Second is information” and reaching out to those who are not regular churchgoers, he continued, while from a logistic standpoint it is a large event and the Government is also doing its part.

Grušas concludes reflecting on his own feelings of joy for the upcoming papal journey: “With the Pope’s arrival we expect the guest who represents God’s presence: we are preparing to have a great guest.”

He said that just as Pope John Paul II’s visit gave Lithuanians great hope at the beginning of a new era for the nation; today, he added, with all the difficulties of the current historic time people are equally in need of a message of hope as “they sense the great hope for freedom is more difficult than they had expected”.

“They need new hope to be instilled, Grušas said, the hope for the future is not solely in economics and in political laws but also in Jesus Christ, in salvation and in the joy of the gospel message: it’s something the people need to hear.”