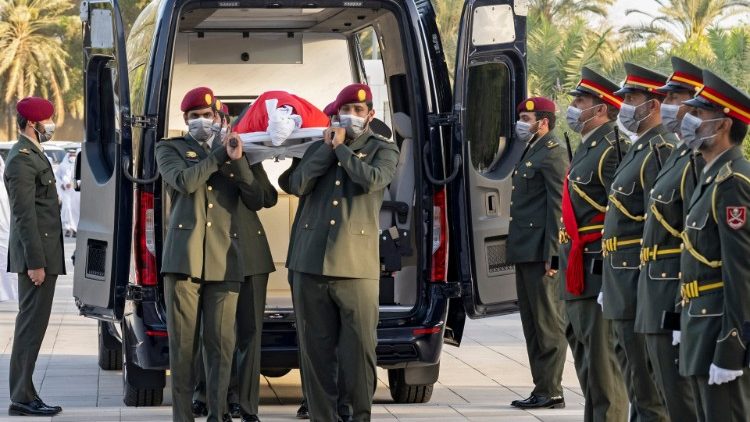 The Pope assures the new president of the United Arab Emirates of “all his prayers”, joining the people of the Emirates in mourning the death of the former president.

Pope Francis has sent a message of condolence on the death of His Highness Sheikh Khalifa bin Zayed Al Nahyan, President of the United Arab Emirates and Sovereign of Abu Dhabi.

The message was addressed to His Highness Sheikh Mohammed bin Zayed Al Nahyan, President of the United Arab Emirates.

In it, the Pope writes that he was saddened to learn of the death of Sheikh Khalifa bin Zayed Al Nahyan, and offers heartfelt condolences and prayers.

He also joins with the people of the Emirates “in mourning his passing and paying tribute to his distinguished and far-sighted leadership in the service of the nation.”

Pope Francis writes that he is “particularly grateful for the solicitude shown by His Highness to the Holy See and to the Catholic communities of the Emirates, and for his commitment to the values of dialogue, understanding and solidarity between peoples and religious traditions solemnly proclaimed by the historic Abu Dhabi Document and embodied in the Zayed Award for Human Fraternity.”

In commending His Highness to the eternal mercies of the Most High God, the Pope also prays that his legacy will “continue to inspire the efforts of men and women of goodwill everywhere to persevere in weaving bonds of unity and peace between the members of our one human family.”

Pope authorizes non-clerics to be Major Superiors in certain cases