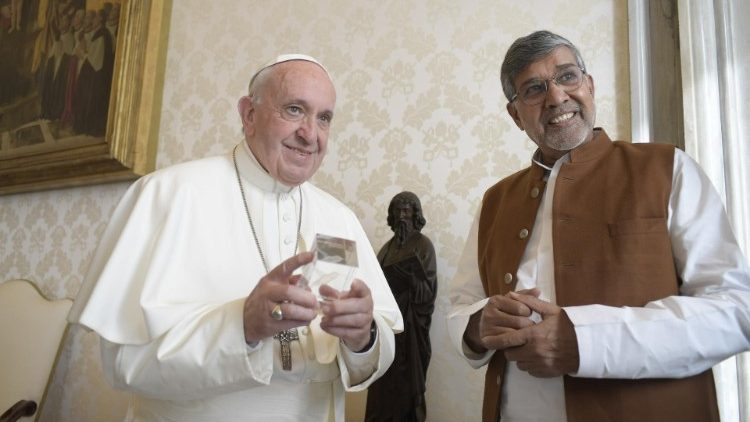 Founder of the “Bachpan Bachao Andolan”, or the Save Childhood Movement, and other initiatives against child labour and the abuse and exploitation of children, the 64-year old former electrical engineer and teacher has been honoured with numerous recognitions both in India and abroad.

Sathyarthi shares common a ground with Pope Francis, who is an ardent crusader of children’s rights and has taken strong measures against child sexual abuse in the Catholic Church.

Sathyarthi told Vatican News he met the Pope once briefly, but Friday’s meeting was private, during which he discussed some of his specific proposals with the Pope.

“I had gone with a very specific agenda seeking his support for my demand for a legally binding UN [United Nations] convention to stop online child sexual abuse and pornography.”

Sathyarthy said the Pope not only supported his initiative but also promised to work for it, which he considered a “great accomplishment”.

The rights activist also spoke about his call for a global task force against online pornography and sexual abuse of children and trafficking.  This task force, he explained, should have “extraterritorial jurisdiction” because this online crime goes beyond borders.

Sathayarthi is also urging for a global help-line where the victims, survivors and their well-wishers can call.  This help-line, he said, should be monitored by Interpol (International Criminal Police Organization) or any UN agency.  The Pope also backed this proposal.

Lastly, the 2014 Nobel Peace co-laureate expressed his appreciation for the initiatives of Pope Francis addressing the issue of sexual abuse in the Catholic Church.

Vatican documentary on priest who transformed poverty into hope