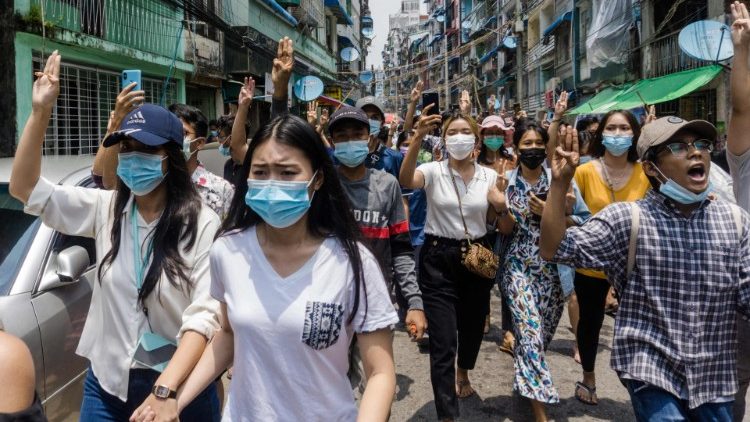 Pope Francis appeals for the international community to work to reconcile conflicting parties in Myanmar, as the Asian nation marks one year since the military coup d’état.

As Myanmar marks the first anniversary of the 1 February military coup, Pope Francis once again renewed his prayer for “that tormented population”.

He said the world has painfully witnessed “the violence that is bloodying Myanmar.”

“I join in the appeal of Myanmar’s Bishops urging the international community to work toward reconciliation between the interested parties.”

The Pope said the world cannot “look away in the face of the sufferings of so many brothers and sisters.”

And he prayed that God might “console that tormented population”, and entrusted all efforts of peace to God.

A junta headed by Senior General Min Aung Hlaing took power and has held on to it ruthlessly with bloody crackdowns on protesters and rebel militias.

Over 1,500 protesters have been killed so far, and nearly 12,000 others arrested, according to data from the Assistance for Political Prisoners (AAPP).

The Archbishop of Yangon, Cardinal Charles Bo, has appealed constantly to the junta to return to nation to a democratic path and to respect human rights.

He has also expressed the commitment of the country’s Bishops to accompanying Myanmar’s Catholics, many of whom have endured the military’s harsh rule and seen several of their churches burnt to the ground.

DRC: Consecrated persons, the importance of formation and presence in a changing world.

Pope to secular institutes: ‘Bring the world to the Church’