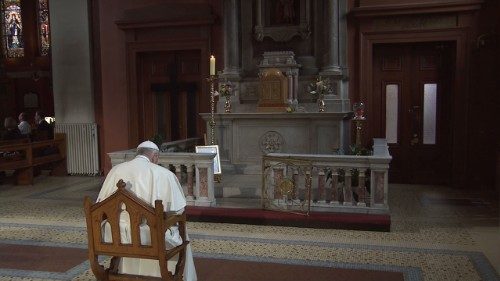 The meeting took place on Saturday evening and lasted about 90 minutes. Participants described the encounter as “cordial and polite”.

Two of those present at the meeting released a statement immediately afterwards in which they said Pope Francis “condemned corruption and cover up within the Church”, describing it as “caca”, a colloquial Spanish term that literally means “filth” or “excrement”.

The two survivors, Clodagh Malone and Paul Redmond, were both infants when they were forcibly separated from their mothers who were staying in Church-run institutions known as “Mother and Baby Homes” at the time. They said they asked the Pope to publicly call for “reconciliation and reunion for these families”.

In his first address in Ireland on Saturday morning, to political and civil authorities, Pope Francis acknowledged the “grave scandal caused in Ireland by the abuse of young people by members of the Church”. He went on to recognize the “failure of ecclesial authorities to adequately address these repellent crimes”.

Again on Sunday, during his visit to the Marian Shrine at Knock, the Pope asked forgiveness for the crime of clerical sex abuse. In an apparent reference to his meeting with survivors the previous evening, he said no one could fail to be moved by the stories of those who “suffered abuse, were robbed of their innocence, and left scarred by painful memories”.

What does “Amoris Laetitia” say about “Love in Marriage”?