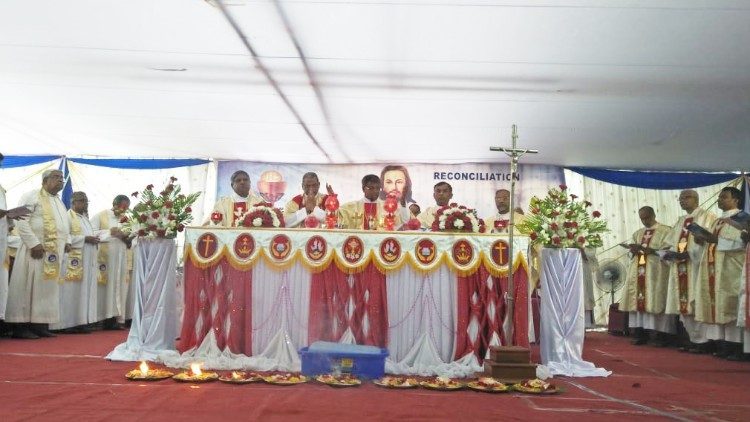 Ten years on, India’s Christians recalled the terrible massacre of their brothers and sisters in faith in eastern India’s Odisha state, with a commemorative Mass on Saturday in the state capital in thanksgiving, reconciliation and grace.

Bishops, priests, religious and lay faithful came together in large numbers for the high Mass at St. Joseph’s School ground in Bhubaneswar on August 25, recalling the day 10 years ago when violence erupted with untold brutality against the Christians of Kandhamal District, with Hindu extremists blaming them for the August 23 murder of their Hindu leader Swami Lakshmanananda Saraswati and four of his disciples.

Even though Maoist rebels claimed the assassination, the anti-Christian violence continued unabated for days and months on end.

The violence, considered to be India’s worst against Christians in 300 years, displaced an estimated 56,000 Christians who were forced to flee to the forests where many perished because of hunger and snakebites. Church and social activists reported the destruction of almost 300 churches, convents, schools, hostels and welfare facilities.  Women and young girls were raped.

At least 91 people died, 38 immediately, 41 from injuries sustained in the violence, and 12 in police action. However, according to government figures, 38 people were killed and two women raped.  Scores of people were injured and permanently maimed.

Seven Innocent Christian men, six of them illiterate including a mentally challenged, were convicted and are serving life sentences for the murder of  Lakshmanananda.   An online campaign, www.release7innocents.com, is trying to get them released.

Each year Christians recalled the August 25 massacre as Kandhamal Day.

The Catholic Bishops’ Conference of India (CBCI) and the Archdiocese of Cuttack-Bhubaneswar, under whose jurisdiction comes Kandhamal  District, organized Saturday’s memorial Mass, which was concelebrated by 13 bishops along with over 90 priests.

Bishops and faithful from other Christian denominations were also present, in demonstration of the unity and solidarity in their common faith in Christ for which many of them shed their blood and continue to suffer even today.

Archbishop John Barwa of Cuttack-Bhubaneswar who presided over the Eucharist, reminded those present that God works in our lives and in the life of the Church through mysterious ways. The blood of the martyrs of Kandhamal, he pointed out, has brought many blessings upon the Church in Odisha and in the Country.

CBCI secretary-general, Bishop Theodore Mascarenhas delivered a homily reminding the congregation that like the people of Israel we are very often helpless but the power of God gives us such strength that no human clout can give.  He admitted we all feel the pain of the tragedy but no anger because Christ teaches us to forgive.

He said the commemorative Mass was to thank God for the gift of the faith of our martyrs who show us the way to continue living our faith with courage and conviction. He exhorted the people to pray for those still suffering the pain of the tragedy, for justice for the victims but also for those who indulged in violence, that God may convert their hearts and minds. The people were called upon to pray for peace and harmony in the country.

“Ten years ago, what happened in Kandhamal, Odisha, should have never happened and should never ever happen again,” Archbishop Barwa said recently, announcing the commemorative Mass of August 25.  “What was heartbreaking,” he said, was that the “massacre of the innocents continued unabated for months.”

The Mass was also an occasion for initiating the process of beatification and canonization of Fr. Marian Zelazek a Polish Divine Word missionary who served in India and died peacefully in the Archdiocese of Cuttack- Bhubaneswar on 20th April 2006.

After the Mass, a book, “Flames of Faith in Kandhamal”, by Fr. Udayanath Bishoyi was also released.  (Source: Archdiocese of Cuttack-Bhubaneswar)