Pope Francis: Albania, a land of ancient and glorious history 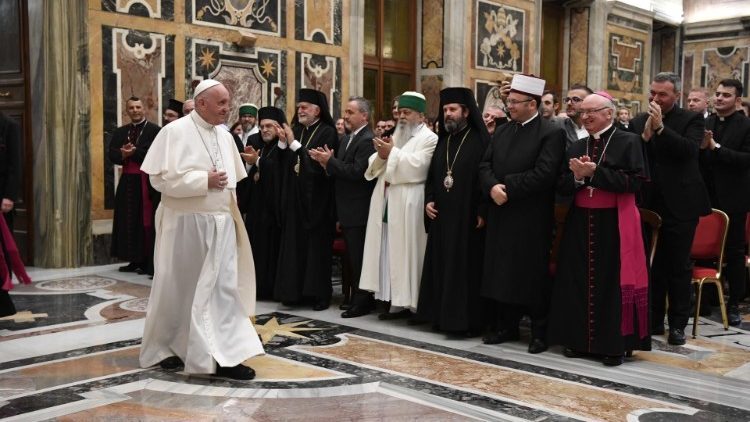 Share
In his prepared remarks to Albanian pilgrims, Pope Francis took the opportunity to greet all Albanians “in the name of the ancient bond of friendship and habitual relations” with the See of Peter.

An ancient and glorious history

Pope Francis noted the “ancient and glorious history” of Albania, remarking that the country is an integral part of Europe, with its own unique culture. “Today,” he said, “we remember and celebrate George Castriot Skanderbeg, an heroic son of a strong and generous people, who defended spiritual values and the Christian name with courage.” Skanderbeg, he continued, “forged the Albanian cultural identity with his deeds, becoming an undisputed symbol of cohesion and national unity.”

The Holy Father also spoke of the emigration of many Christians after the death of Skanderbeg, and the subsequent invasion of Albania, and welcomed the presence of Italo-Albanians among the pilgrims.

“I sincerely hope that this anniversary will not be limited to the celebration of the glory of past deeds,” the Pope said, “but will also be a good opportunity for a renewed commitment of all, institutions and citizens, in favour of an authentic and balanced development, so that the younger generations” will not be forced to migrate.

From coexistence to collaboration and brotherhood

The example of Skanderbeg, Pope Francis said, “has validly expressed the Albanian character.” In particular, he pointed out the “climate of mutual respect and trust” between Catholics, Orthodox, and Muslims. This, he said, shows that the peaceful coexistence of citizens belonging to different religions is a concretely viable path that produces harmony, and frees the best forces and the creativity of an entire people, transforming simple coexistence into true collaboration and brotherhood.”