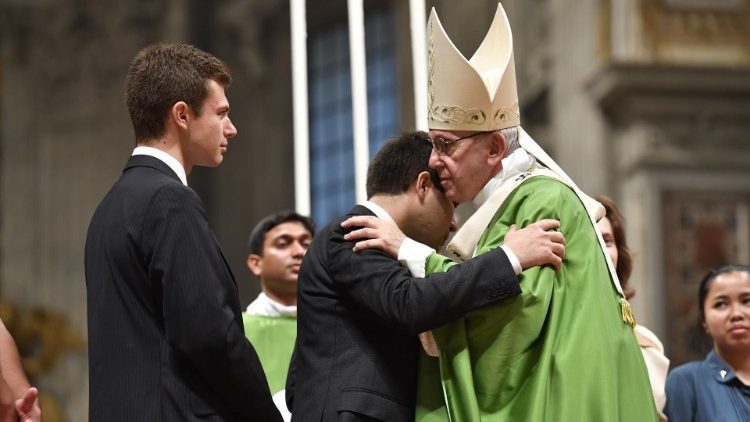 Jesus models to his disciples three “fundamental steps on the journey of faith”, Pope Francissaid during his homily, which picked up threads from the Gospel story of Jesus healing the blind Bartimaeus. This Gospel connected well with the liturgy celebrating the closing on Sunday of the XV Ordinary General Assembly of the Synod of Bishops on Young People.

Jesus reacts to Bartimaeus’ plea differently than the disciples, Pope Francis says. Even though it is obvious what a blind man would want, Jesus “goes to him; he lets him speak”. Furthermore, Jesus takes time to listen. Pope Francis continued:

“This is the first step in helping the journey of faith: listening.  It is the apostolate of the ear: listening before speaking”.

Children of the Father

Disciples who follow their own plans instead of that of the Lord find people like Bartimaeus to be nuisances, Pope Francis said. He called this a risk that we must constantly watch out for. Disciples who are truly the Father’s children approach the same people differently.

“They listen patiently and lovingly, just as God does to us and to our prayers, however repetitive they may be.  God never grows tired; he is always happy when we seek him.  May we too ask for the grace of a heart that listens.”

Pope Francis then asked forgiveness of young people in the name of all adults.

“Forgive us if often we have not listened to you, if, instead of opening our hearts, we have filled your ears.”

The second step in this journey of faith is to become a neighbour to the person asking for help. Jesus did not delegate the task to someone else, Pope Francis noted. He personally went to Bartimaeus and asked him what he wanted so that his response would respond to Bartimaeus’ need. This how God works, the Pope said.

Obeying Jesus, the disciples approach Bartimaeus. They don’t throw him a coin, but they say to him words that only Jesus has said prior this episode: “Take heart”, and “get up”.

“In the Gospel, Jesus alone says, “Get up”, and heals in spirit and body.  Jesus alone calls, transforming the lives of those who follow him, helping raise up the fallen, bringing God’s light to the darkness of life.”

Faith begins with need to be saved

The conclusion of the Gospel account is surprising, the Pope ended. Without a profession of faith or any good work, Bartimaeus hears Jesus say, “Go your way; your faith has saved you”. His need for salvation was the beginning of his faith, Pope Francis pointed out.

“The faith that saved Bartimaeus did not have to do with his having clear ideas about God, but in his seeking him and longing to encounter him.  Faith has to do with encounter, not theory.  In encounter, Jesus passes by; in encounter, the heart of the Church beats.  Then, not our preaching, but our witness of life will prove effective.”