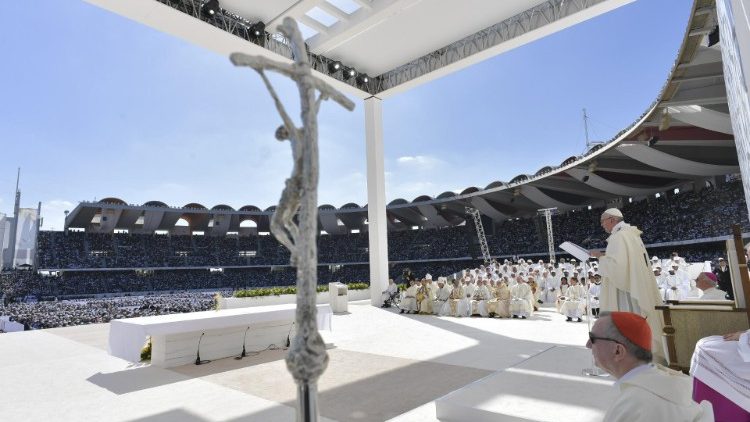 Pope Francis extends the jurisdiction of Eastern Catholic Patriarchs over the Arabian Peninsula, in response to requests from the Patriarchs, for the greater spiritual good of the faithful.

Pope Francis, with a Rescriptum published by the Vatican Press Office on Thursday, has extended the jurisdiction of the Eastern Catholic Patriarchs over the entire Arabian Peninsula, which includes the Apostolic Vicariates of Northern and Southern Arabia.

The latest announcement– fruit of careful evaluation by the Pope and the appropriate Dicasteries of the Roman Curia –  is in response to requests made by the Patriarchs and Apostolic Vicars of Northern and Southern Arabia, in view of the greater spiritual good of the faithful, as well as the historical prerogatives of their jurisdiction over the territory.

With this latest Rescriptum, the pastoral care of the Eastern faithful will now be carried out in coordination with the Apostolic Vicars.

Therefore, without prejudice to the prerogatives of Pontifical Representatives, Apostolic Vicars are the representatives of the Catholic Church to the political authorities of their respective countries. Eastern Patriarchs are thus to refer to them in such matters.

In derogation of the Code of Canons of the Eastern Churches (85 § 1), the possible creation of new ecclesiastical circumscriptions by the Synods of the Patriarchal Churches will be subject to the prior authorization of the Apostolic See. This derogation is established for five years, after which it will be reviewed.

In the Eastern Church’s context of an overwhelming Muslim majority and a diversity of ritual traditions, the Church’s purpose with the latest Rescriptum is to foster communion.

The Church aims at safeguarding and promoting the common vision of pastoral action, understanding and collaboration. This latest provision will also prevent the multiplication of interlocutors with political authorities before whom pontifical representatives and Apostolic Vicars are the privileged references.

The Catholic Patriarchal Churches will be able to provide direct pastoral care for the faithful, who since 2003 have been under the care of the Latin Apostolic Vicars.

At the same time, the Latin and Eastern Churches can now, in a more coordinated way, continue to journey with Catholic migrants in the region so that they too may hear the Gospel and be accompanied by their legitimate pastors.

Pope Francis on training the next generation to be…