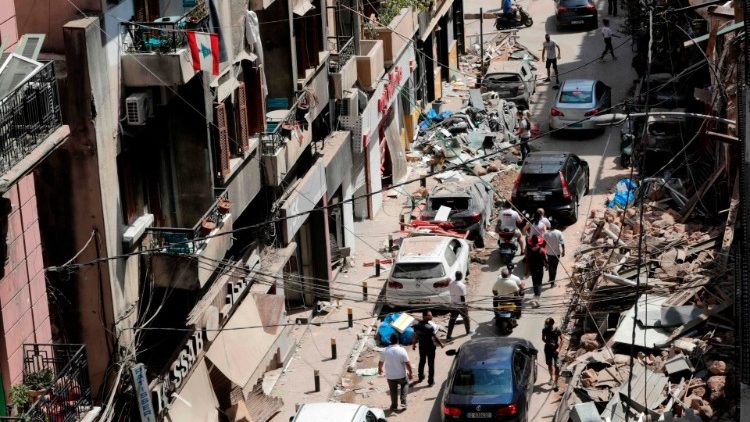 Cardinal Jean-Claude Hollerich of Luxembourg, the president of the European bishops’ conferences, issues a message of condolence following Tuesday’s explosions in Beirut.

The bishops of the European Union (EU) have expressed deep shock and sadness at the devastating explosions in the Lebanese capital on Tuesday.

The blasts at Beirut’s port has killed at least 135 people and injured thousands, sending shock waves deep into the city with widespread damage to property.  The explosions appeared to have been caused by a fire that touched off a massive quantity of ammonium nitrate fertilizer stored for years in the port.

“I would like to express our deepest condolences to the families of the victims and to all those that have lost loved ones – friends, neighbours, colleagues,” Cardinal Jean-Claude Hollerich of Luxembourg, the president of the Commission of the Bishops’ Conferences of the EU (COMECE), wrote in a condolence message on Wednesday.

“We raise our prayers for the souls of the deceased and for the speedy recovery of the injured.”

He said the EU bishops were sharing the sentiments of Pope Francis for Lebanon and were praying “so that through the dedication of all its social, political and religious elements, it might face this extremely tragic and painful moment”.

Cardinal Hollerich pledged the closeness of EU’s Catholic Church “with Lebanese people, including the many refugees who escaped violence and were welcomed in fraternity by this small but generous country with a key role for peace in the entire Middle Eastern region”.

The COMECE president expressed appreciation for the “immediate assistance and humanitarian mechanisms activated by the EU in support to the Lebanese authorities,” as stated by Janez Lenarčič, EU Commissioner for Crisis Management.

The explosions come atop the country’s worst economic crisis besetting its 4.5 million people, who are already burdened with accommodating an estimated 1.5 million refugees, mostly from neighbouring Syria.

Cardinal Hollerich invited the EU to work with the government and people of Lebanon, including local religious communities, “in this dramatic historical moment, also marked by the Covid-19 pandemic, a heavy economic crisis and a serious regional instability”.

The 61-year old Archbishop of Luxembourg repeated his sentiments in an interview to Vatican News.  He said the EU bishops are suffering with and praying for the people of Lebanon because they are Europe’s neighbours. Listen to Cardinal Jean-Claude Hollerich

The Middle East nation, he pointed out, has something very European in its multi-layered culture, as numerous Lebanese are living in Europe.  Hence they deserve Europe’s solidarity.

Cardinal Hollerich said some of the EU’s bishops’ conferences have been very generous with Lebanon at this dark moment.  Caritas Internationalis, of which the Caritas units of Europe’s bishops’ conferences are members, is reaching out to Lebanon.  Besides, Christians in Europe are also helping out with financial aid.

With regard to the country’s deep economic crisis and the burden of refugees, the cardinal said that COMECE is committed to a dialogue of justice and fair trade system with EU’s neighbours.  Since Lebanon is in the doorsteps of Europe, it is in the interest of the continent to be committed to peace in the country.  “But as Christians,” Cardinal Hollerich said, “we must not just react for our own interest but we have to act out of compassion, charity and out of solidarity.”

Following the Beirut blasts, countries and organizations around the world have rallied around Lebanon offering financial, food, medical and other assistance.