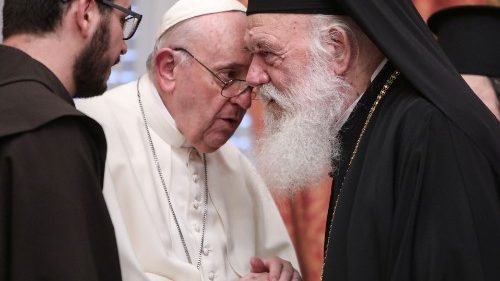 On his first day in Greece, Pope Francis meets the small Catholic community in Athens. In his speech he encourages Catholics in Greece to follow the example of St. Paul, who converted St. Dionysius in the Areopagus, sowing the mustard seed of the Christian faith in Greece.

Following his meeting with the Greek Orthodox Primate Hieronymos II and the Holy Synod, Pope Francis proceeded to meet the Greek Catholic community at the Cathedral of Saint Dionysius in Athens on Saturday afternoon.

The Archbishop emeritus of Athens, Sevastianos Rossolatos, greeted the Pope to open the encounter. His remarks were followed by two testimonies: by an Argentinian nun working on the island of Tinos, and by a Catholic layman. They spoke about the joys and challenges of being a small faith community in an Orthodox majority country, amidst growing secularization and immigration, which is changing the makeup of the local Church.

In the footsteps of St Paul

Addressing the attending bishops, priests, religious, seminarians, and catechists, Pope Francis encouraged the small Catholic community in Greece to follow the example of St. Paul, who converted St. Dionysius, the first Bishop and Patron Saint of Athens, in the Areopagus.

Pope Francis noted that proclaiming the Gospel in the Greek society of the time was not easy, but the Apostle managed to sow the small mustard seed of faith synthesizing Christianity and Greek culture.

The Pope drew attention in particular to two attitudes that helped the Apostle make a breakthrough in pagan Greece and that can be helpful today in inculturating the faith in the country.

The first attitude, he said, was confident trust. As recounted in the Acts of the Apostles, upon arriving in Athens, Paul was brought to the Areopagus as an unwelcome guest to be put to the test. “Perhaps, many times along the way, we too feel weary and even frustrated at being a small community, a Church with few resources operating in a climate that is not always favourable”, Pope Francis noted.

However, in this hostile environment, Paul did not give up on his mission, nor did he yield to the temptation to complain. “That is the attitude of a true apostle: to go forward with confidence, preferring the uncertainty of unexpected situations rather than the complacency that comes from the force of habit”, Pope Francis remarked, recalling that Paul’s courage came from confident trust in God.

The same attitude is needed today in the small Catholic community in Greece: “As Church, we are not called to have the spirit of conquest and victory, impressive numbers or worldly grandeur. We are asked to take our inspiration from the mustard seed, which appears insignificant, but grows slowly and quietly”, Pope Francis said. “We are asked to be yeast, which rises patiently and silently, hidden within the dough of the world, thanks to the constant work of the Holy Spirit”.

Smallness is a blessing

So, Pope Francis continued, “consider your smallness a blessing and accept it willingly.  It disposes you to trust in God and in God alone. Being a minority – and do not forget that the Church throughout the world is a minority – does not mean being insignificant, but closer to the path loved by the Lord, which is that of littleness: of kenosis, of abasement, of meekness”.

The attitude of acceptance

Pope Francis went on to highlight the second attitude shown by Paul in the Areopagus: that of acceptance, which “does not try to occupy the space and life of others, but to sow the good news in the soil of their lives; it learns to recognize and appreciate the seeds that God already planted in their hearts before we came on the scene”.

Paul, he noted, adopted a remarkable pedagogy with the Athenians: “He did not impose; he proposed.  His ‘style’ was based not on proselytizing, but on the meekness of Jesus”.

This is the right attitude to take today, knowing that “the Holy Spirit always does more than what we can see from the outside”, the Pope pointed out, referring to the words of the Catholic layman named Rokos, who in his testimony spoke about his uneasiness at seeing his children falling away from religious practice.

Continuing his reflection, Pope Francis went further, highlighting the need in Greece to be “a heart desirous of creating communion amid human, cultural, and religious differences”. He recalled Pope Benedict XVI’s words in his address to the Roman Curia on 21 December 2009, in which the German Pontiff noted that “we must have at heart those who are agnostics or atheists, but take care that, when we speak of a new evangelization, they not be put off”.

Cultivating the ‘mystique” of fraternity

The challenge today, Pope Francis remarked, is “to develop a passion for the whole, which can lead us – Catholics, Orthodox, brothers and sisters of other creeds – to listen to one another, to dream and work together, to cultivate the ‘mystique” of fraternity. Past hurts remain along the path towards such a welcoming dialogue, but let us courageously embrace today’s challenge!” he added.

Being a laboratory of faith

Wrapping up his discourse, Pope Francis noted that although most people in the Areopagus laughed at St, Paul and left, some, including Dionysius, joined him and became believers. It was a small remnant, he said, “yet that is how God weaves the threads of history, from those days until our own. It is my fervent desire that you continue the work in your historic ‘laboratory’ of faith”, Pope Francis concluded.