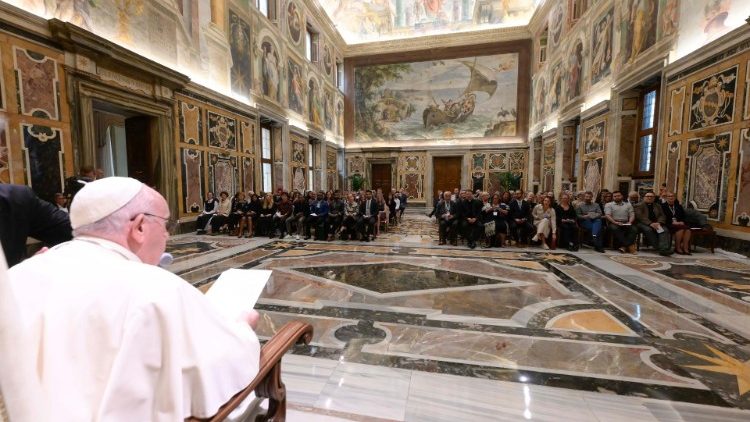 Pope Francis urges participants at the Gregorian University conference on Initiatives in Refugee and Migrant Education to do more in research, teaching and social promotion of migrants and refugees, and to make all educational institutions places of welcome, protection, promotion and integration for all, to the exclusion of none.

Pope Francis received in audience at the Vatican Thursday, the participants at the Gregorian University Conference on “Initiatives in Refugee and Migrant Education.”

Welcoming them, the Pope highlighted the conference as a planned moment of reflection grounded “in the needs of our migrant brothers and sisters, with particular attention to children and young people,” who have expressed their desire to pursue their education despite being uprooted from their native lands.

The Pope then emphasized the importance of the participants’ contributions in three areas pertaining to their competencies – research, teaching and social promotion.

Pope Francis highlighted the need for further studies on the so-called “right not to emigrate”, noting that it is important to reflect on the causes of migratory movements and on the forms of violence that lead people to depart for other countries, including the conflicts ravaging many regions in the world.

He also pointed to another kind of violence – the abuse of our common home – stressing that the earth has been devastated by pollution and the excessive exploitation of the earth’s resources.

The Holy Father called on academia, and particularly Catholic academia, to play a role in providing answers to ecological challenges because they are in a position to help guide and inform the decisions of leaders in the care of our common home.

The Pope acknowledged the commitment to establishing educational programmes that benefit refugees. He noted that much has been already accomplished but still more remains to be done.

While stressing that priority should be given to the most disadvantaged, he proposed that institutions can offer courses that respond to the needs of refugees, such as organizing programmes of distance learning and providing scholarships to permit their resettlement. He further suggested that universities too, while drawing upon the resources of the international network of academic institutions, can facilitate the recognition of the degrees and professional qualifications of migrants and refugees, both for the good of the migrants and the societies that receive them.

“Schools and universities are privileged environments not only for instruction but also for encounter and integration,” Pope Francis said.

“We can grow in our common humanity and build together an ever greater sense of togetherness. Openness to one another creates spaces of fruitful exchange between different visions and traditions, and opens minds to new horizons.”

The Pope also called for specific professional training to be given to personnel and teachers who work with migrants and refugees, highlighting that opportunities for meaningful encounters are to be promoted, “so that teachers and students can have an opportunity to hear the stories of those men and women who are migrants, refugees, displaced persons or victims of trafficking.”

“Catholic institutions of higher learning are called to educate their own students, who will be tomorrow’s administrators, entrepreneurs and cultural leaders, to a clearer understanding of the phenomenon of migration, within a perspective of justice, global responsibility and communion in diversity,” Pope Francis said.

In the area of social promotion, the Pope upholds universities as institutions that interact with the social context in which they operate, and can help in identifying the foundations for the construction of an intercultural society in which “ethnic, linguistic and religious diversity is seen as a source of enrichment and not an obstacle for the common future.” They also provide a privileged setting for encouraging young people to engage in volunteer work with refugees, asylum seekers and vulnerable migrants to boot.

Recalling his appeal on the World Day of Migrants and Refugees to work with migrants in order to build a better future, the Pope stressed that history teaches us that the contribution of migrants and refugees has been fundamental to the social and economic growth of our societies, even to this day.

He insisted that “their work, their youth, their enthusiasm and their willingness to sacrifice enrich the communities that receive them” and this contribution could be all the greater if it were optimized and supported by carefully developed programmes and initiatives.

Concluding his address, the Pope urged the participants at the conference to be guided in their work in the areas of research, teaching and social promotion by the four words that encapsulate the Church’s teachings on migrants and refugees: welcome, protect, promote and integrate.

He insisted that “every educational institution is called to be a place of welcome, protection, promotion and integration for all, to the exclusion of none.”

Finally, with a request for prayers for himself, Pope Francis blessed the participants and encouraged them to persevere in their efforts.