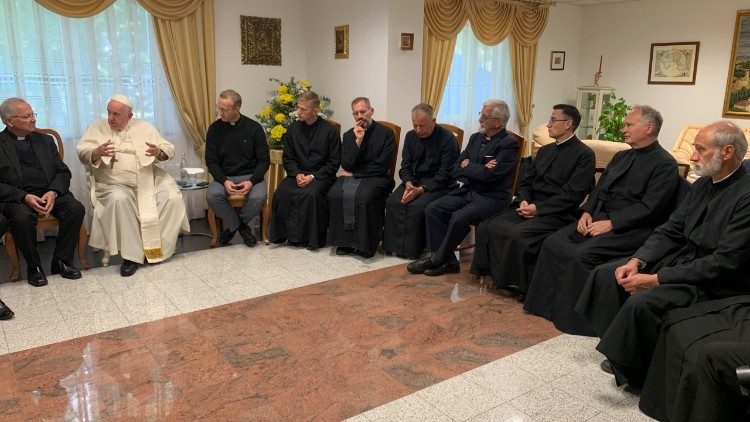 The Jesuit review “La Civiltà Cattolica” releases Pope Francis’ conversation with Jesuits in the “Russian Region” while on his Apostolic Journey to Kazakhstan, in which the Pope reflected on the causes of what he calls the third world war.

We must free our hearts from hatred. Pope Francis offered that plea to the 19 Jesuits he met in the Apostolic Nunciature in Nur-Sultan on 15 September 2022, while on his Apostolic Journey to Kazakhstan.

The members of the Society of Jesus had traveled to the Central Asian nation from various countries which the Jesuits refer to as the “Russian Region”.

“It is the people who suffer in war,” said the Pope. “This generates hatred, and those who make war forget ‘humanity.’”

Not conflict between good guys and bad guys

“I think it’s a mistake to think it’s a cowboy movie where there are good guys and bad guys,” noted Pope Francis, adding that he has no doubt that “this is a world war.”

“We need to investigate the root causes that led to the conflict,” he said, referring first to the “international factors that contributed to provoking the war.”

The Holy Father also recalled an audience he had in the Vatican in December 2021, on the eve of the outbreak of the war in Ukraine, by a head of state who said he was very concerned “because NATO had gone barking at the gates of Russia without understanding that the Russians are imperial and fear insecurity on their borders.”

Regarding the causes of the war, Pope Francis said “one cannot be simplistic.”

“I see imperialisms in conflict,” he affirmed. “And, when they feel threatened and in decay, imperialisms react by thinking that the solution is to start a war to remake themselves, and also to sell and test weapons.”

Visit to Ukraine not feasible at this time

“From the first day until yesterday, I have spoken constantly about this conflict, referring to the suffering of Ukraine,” he pointed out to the Jesuits of the Russian Region.

The Pope also highlighted his visit to the Russian Embassy, soon after Russia invaded Ukraine, which he admitted was “unusual” for a Pope. He said the visit was animated by a desire to be able to speak with President Putin and open “a small window of dialogue”.

He also mentioned his telephone conversations with Ukrainian President Volodymyr Zelensky and the missions to Ukraine by Cardinal Czerny, Cardinal Krajewski, and Archbishop Gallagher, as well as his commitment to Ukrainian prisoners.

“I was also planning to be able to go [to Ukraine],” said Pope Francis. “It seems to me that God’s will is not to go at this precise moment; we’ll see later, though.”

Ordinary people are victims of war

“I called the invasion of Ukraine an unacceptable, repugnant, senseless, barbaric, sacrilegious aggression,” he pointed out. “Ordinary people are the real victims who pay for the follies of war with their own skin.”

Pope not angry when misunderstood

“I also referred to that woman who was blown up,” he added in relation to the words spoken in the aftermath of the attack on Darya Dugina, daughter of the man known as “Putin’s brain”.

“At this point, people forgot everything I had said up to that point and only paid attention to that reference. But I understand people’s reactions, because they are suffering a lot.”

“The Pope does not get angry if he is misunderstood, because I know well the suffering behind it,” he added.

Speaking about the mission of the Society of Jesus, Pope Francis said, “I am not interested in you defending the Pope, but that the people feel cared for by you who are the Pope’s brothers.”

What we must do, he said, is “demonstrate closeness”, since “the people must feel that the Church is close” because “God’s style is closeness.”

The full text of Pope Francis’ conversation with Jesuits in Kazakhstan will be made available online on Thursday, 29 September at 10:00 AM in “La Civiltà Cattolica” in an article by the magazine’s editor, Father Antonio Spadaro.