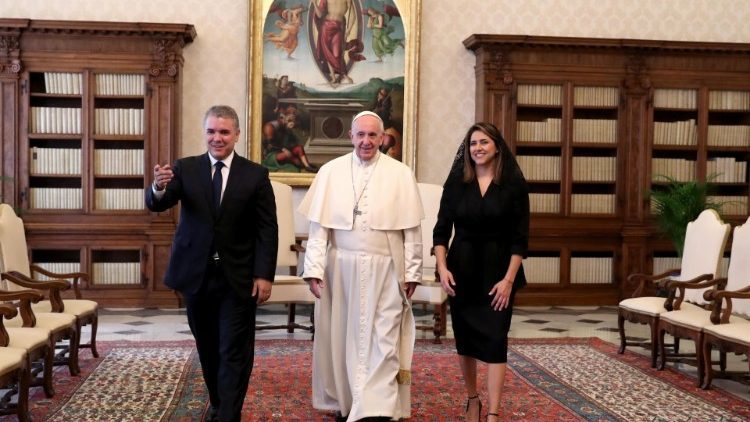 Pope Francis received President Iván Duque Márquez of Colombia in a private visit in the Vatican on Monday. Duque then held a meeting with Vatican Secretary of State Cardinal Pietro Parolin and Vatican Under-Secretary for Relations with States, Monsignor Antoine Camilleri.

A statement by the Holy See’s Press Office said that “during the discussions, which took place in a cordial atmosphere, satisfaction was expressed for the good bilateral relations.”

The Vatican said that during the talks, “the contribution of the Holy See and the local Church in the peace process and in favour of the reconciliation of the Colombian people was evoked.”

“The importance of constant dialogue between the Church and the State to face current social challenges was underlined” during the discussions, “with special reference to matters of mutual interest such as the protection of life, the fight against corruption and drug trafficking, the promotion of legality and care for the environment.”

The Holy See and Colombia also touched upon “a fruitful exchange of views on the political and social situation of the region, with special attention to migrations.”

English and Welsh bishops on the need for prison reform