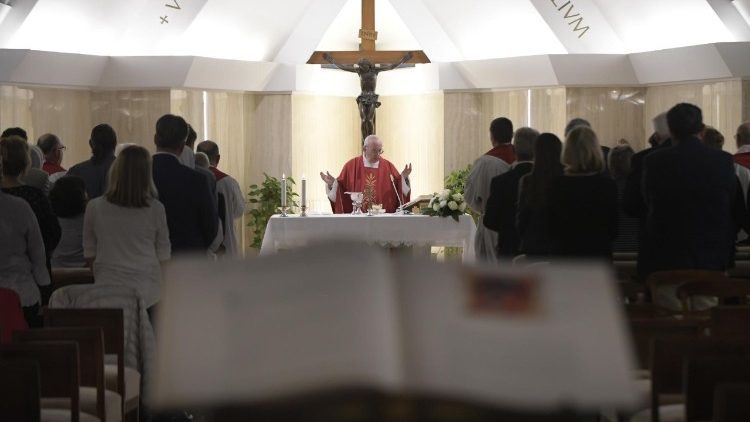 Let us ask Jesus, “with His mercy and His forgiveness,” always to protect our Church which “like a mother, is holy,” but is also “full of sinful children, like us.” This was the prayer of Pope Francis at the morning Mass at the Casa Santa Marta. The Holy Father was reflecting on the day’s readings, focusing on the words of Jesus: “her many sins have been forgiven; for she has shown great love.”

The Pope described three types of people in the day’s readings: Jesus and his disciples; Paul and the woman whose sins were forgiven; and the doctors of the law.

The woman in the Gospel is described as having “so much love towards Jesus,” while not hiding the fact that she is a sinner. Saint Paul, the Pope said, is similar in recognizing, and handing on to us, that “Christ died for our sins.” Both were seeking God “with love,” but their love was a kind of “half-love.” The Pope explained that when Paul was persecuting the Church, he thought that love was a law and his heart was closed to the revelation of Jesus Christ. He persecuted Christians out of zeal for the law; and this, the Pope said, was a love that was immature.

The woman, too, was seeking love, the “little love.” The Pharisees commented on the fact that she was a sinner, but Jesus explains: “This woman was forgiven much because she loved much.” The Pope puts a question in the mouth of the Pharisees:

“But how can she love? These people [sinners] do not know how to love.” [But] they seek love. And Jesus, speaking about these people, says – he once said – that they are before us, in the Kingdom of Heaven. “But what a scandal!” – the Pharisees [say] – “But these people!” Jesus looks upon the small gesture of love, the small gesture of good will, and takes it, and carries it forward. This is the mercy of Jesus: He always forgives, He always receives.

The scandal of the hypocrites

With regard to the “doctors of the law,” Pope Francis says that “they have an attitude that only the hypocrites use often: they are scandalized.” And they say:

“But look, what a scandal! You can’t live like that! We have lost our values. Now everyone has the right to enter into the church, even the divorced, everyone. But where are we?” The scandal of the hypocrites. This is the dialogue between the great love that forgives all, [the love of] Jesus; [and] the love “by halves” of Paul and of this woman, and also our [love], which is an incomplete love because none of us is a canonized saint. Let’s be honest. It is hypocrisy: the hypocrisy of the “just,” of the “pure,” of those who believe they are saved by their own proper external merits.

The Church historically persecuted by hypocrites

Jesus recognizes how such people show exteriorly that “all is well” – He speaks of “whitened sepulchers” – but within there is rot and decay. The Pope continued:

And the Church, when it journeys through history, is persecuted by hypocrites: hypocrites within and without. The devil has nothing to do with repentant sinners, because they look upon God and say, “Lord, I am a sinner, help me!” And the devil is impotent; but he is strong with hypocrites. He is strong, and he uses them to destroy, to destroy the people, to destroy society, to destroy the Church. The workhorse of the devil is hypocrisy, because he is a liar. He makes himself out to be a powerful prince, beautiful, and from behind he is an assassin