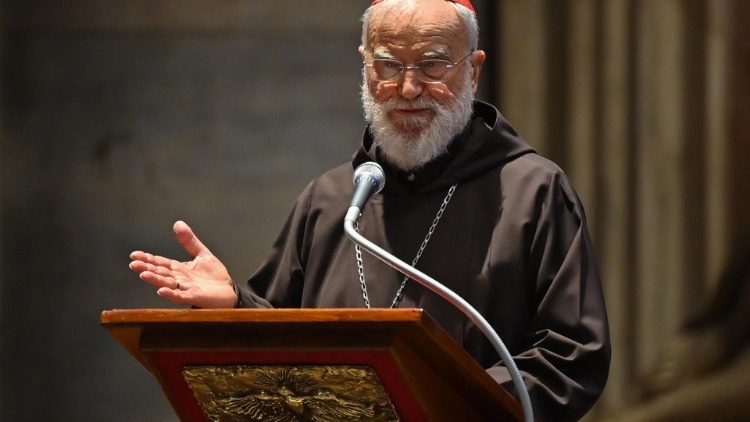 In his meditations for Advent this year, the preacher of the Pontifical Household focuses on bringing to light “the inner splendour of the Church and of Christian life”, without “closing one’s eyes to the reality of the facts”, so that each person can face his or her responsibilities from the right perspective.

In the face of the danger of living as if the Church were only “scandals, controversies, clashes of personalities, gossip or at most some goodwill in the social field – in short, a thing of men like everything else in the course of history”, Father Raniero Cantalamessa, cardinal and preacher of the Pontifical Household, in his Advent reflections proposes to “look at the Church from within, in the strongest sense of the word, in the light of the mystery of which she is the bearer”, so that we do not lose sight of the mystery that inhabits her. The theme of the Advent meditations hosted in the Paul VI Hall on the three Fridays preceding Christmas is “When the fullness of time had come, God sent his Son”, taken from verses 4-7 of chapter 4 of St Paul’s Letter to the Galatians, which summarises the entire Christian mystery. The Cardinal picked up from his preaching of Lent, which had “sought to highlight the danger of living ‘etsi Christus non daretur’, ‘as if Christ did not exist'”.

In today’s meditation, the Capuchin religious concentrates only on the first part of the text of the Apostle of the Gentiles that guides his Advent sermons – “God sent his Son so that we might receive adoption as sons” – and emphasises that “the fatherhood of God is at the very heart of Jesus’ preaching”. And if “even in the Old Testament God is seen as a father”, the novelty of the Gospel “is that now God is not seen so much as ‘father of his people Israel’, in a collective sense, so to speak, but as father of every human being, whether righteous or sinful”, and “he cares for each one as if he were the only one; of each one he knows the needs, the thoughts and even counts the hair on his head”. In short, what Jesus teaches is that “God is not only father in a metaphorical and moral sense, insofar as he created and cares for his people”, but he is “first and foremost true and natural father, of a true and natural son whom he begat … before the beginning of time” and thanks to whom “men too will be able to become children of God in a real and not just metaphorical sense”. Father Cantalamessa also emphasises that it is with the paschal mystery of Christ’s death and resurrection, that is, thanks to the redemption he wrought and applied to us in baptism, that, as St Paul says, “we have become ‘sons in the Son'”, that “Christ has become ‘the firstborn among many brothers'”.

The Apostle, the cardinal explains, uses the idea of adoption to make us understand the bond that through Christ he establishes with men. An analogy, however, is “insufficient to express the fullness of the mystery”. Because if “human adoption in itself is a legal fact” and “the adopted child takes on the surname, citizenship, residence of the one who adopts him”, without sharing his blood or DNA, “for us it is not like that. God does not transmit to us only the name of sons, but also his intimate life, his Spirit which is, so to speak, his DNA. Through baptism, the very life of God flows through us”. So much so, continues Father Cantalamessa, that St John speaks “of true and proper generation, of birth from God”, which is why “in baptism, we are born ‘from the Spirit’, we are ‘reborn from above'”. For the preacher of the Pontifical Household, what the Pope said at the general audience on 8 September is important in this sense: “We Christians often take for granted this reality of being children of God. Instead, it is good to always gratefully remember the moment when we became children, [the moment of] our baptism, in order to live with greater awareness the great gift received”. And reflecting on the Pontiff’s words, Father Cantalamessa points out:

‘Behold, this is our mortal danger: to take for granted the most sublime things of our faith, including that of being nothing less than children of God, of the creator of the universe, the almighty, the eternal, the giver of life. St John Paul II, in his letter on the Eucharist, written shortly before his death, spoke of the ‘Eucharistic wonder’ that Christians should rediscover. The same should be said of divine sonship: moving from faith to wonder”.

The wonder of faith

In the sacrament of baptism, continues the preacher of the Pontifical Household, “God’s share or the grace of baptism, is manifold and very rich: divine sonship, remission of sins, indwelling of the Holy Spirit, the theological virtues of faith, hope and charity infused in the soul”, man’s contribution, instead, “consists essentially in faith”. But it takes “faith-awe, that widening of the eyes and that Oh! of wonder” before the gift of God, “the ‘savouring’ of the truth of things believed” and the “taste” of the truth, including the bitter taste of the truth of the cross”. In short, the “truth believed” must become “lived reality”:

“How can this qualitative leap from faith to the wonder of knowing we are children of God be made possible? The first answer is: the word of God. (There is a second, equally essential means – the Holy Spirit – but we will leave it for the next meditation). St Gregory the Great compares the Word of God to the flint, that is to say, to the stone that was once used to produce sparks and light the fire. It is necessary, he says, to do with the Word of God what one does with a flint: strike it repeatedly until a spark is produced. Ruminate it, repeat it, even in a loud voice.”

Human fraternity: all brothers and sisters

Cardinal Cantalamessa also invites people to pray to become aware of being children of God and of their dignity as Christians. All this will also lead to an awareness of “the dignity of others, who are also sons and daughters of God”, and of God’s paternity towards all humanity, he says.

For us Christians, human fraternity has its ultimate reason in the fact that God is Father of all, that we are all sons and daughters of God and therefore brothers and sisters among ourselves. There can be no stronger bond than this, and, for us Christians, no more urgent reason to promote universal brotherhood.

For the preacher of the Pontifical Household, nourishing universal brotherhood also means not tempting God “by asking him to espouse our cause against our brother”, not wishing to be right and the other wrong, having mercy towards one another, which is “indispensable for living the life of the Spirit and community life in all its forms”, “for the family and for every human and religious community, including the Roman Curia”. Finally, Cardinal Cantalamessa concluded his meditation by expressing the hope that Scripture can help us discover the true meaning of being children of God.