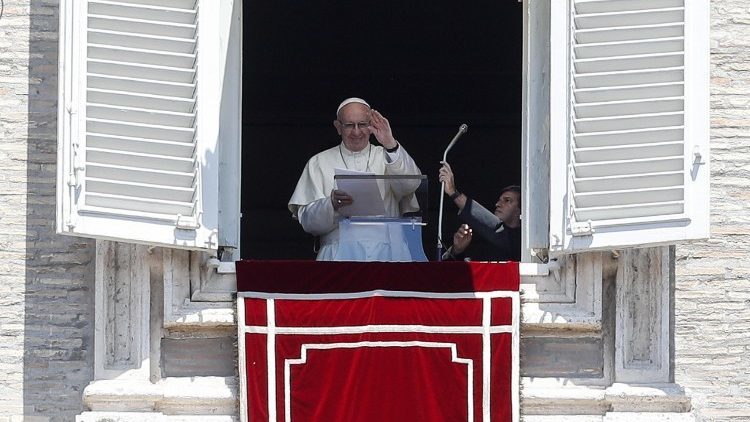 At the Angelus on Sunday, Pope Francis focused once again on the idea of missionary discipleship, taking the day’s Gospel as his starting point. In the Gospel reading, Jesus, after calling the disciples individually by name, goes on to send them out ahead of Him “two-by-two.” This, the Pope said, “is a kind of ‘internship’” in anticipation of their mission following the Resurrection.

Pope Francis said missionary discipleship, the missionary “style,” can be summarized in two points: “mission” has a centre; and it has a “face.”

The first point recalls that the centre of mission is the Person of Jesus Himself. When Jesus sends the Apostles on mission, they are not going forth to spread their own message, or to demonstrate their own abilities. Rather, like rays emanating from a centre, the disciples proclaim the message of Jesus, and to bring His presence and His work into the world. They are called to speak and act as His messengers.

This Gospel passage, he said, applies to us too – and not only to priests, but to all Christians, who are called “to bear witness to the Gospel of Jesus in every aspect of life. For us, too, he added, this mission “is only authentic” when it is focused on Jesus. This is “the mission of the Church, inseparably united to the Lord.” No Christian proclaims the Gospel on their own initiative, “but only when sent by the Church, which has received her mandate from Christ Himself.”

“The second characteristic of the missionary style,” Pope Francis said, is that the mission has “a face,” an aspect that it presents to the world. This “face” consists in “poverty of means.” The disciples were ordered to “take nothing for the journey but a walking stick.” Pope Francis said this means Jesus wants His disciples to be free, depending only on “the love of Him who sends them, strengthened only by His Word which they proclaim.” Missionary disciples are not “all-powerful managers, or irreplaceable functionaries, or divas on tour.”
By Christopher Wells

Pope Francis to young people of the Antilles: “Look to your roots”