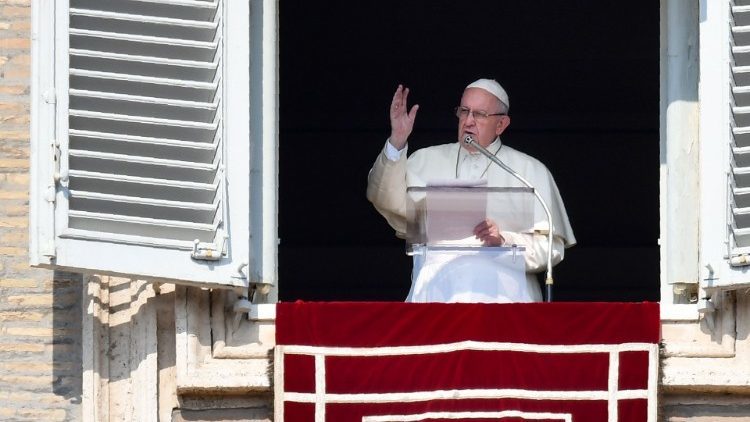 Pope Francis prayed the Angelus with pilgrims gathered on Sunday in St. Peter’s Square, and reflected on the day’s Gospel (Mk 10:35-45).

He spoke about how Jesus tries to correct his disciples by “converting them from the mentality of the world to that of God.”

The Pope spoke about the brothers James and John, who had asked Jesus to sit at his right and left at the coming of the Kingdom of God.

“Jesus knows that James and John are animated by great enthusiasm for him and for the cause of the Kingdom, but he also knows that their expectations and their zeal are polluted by the spirit of the world,” the Pope said.

So, he continued, Jesus tells them: “You do not know what you are asking.”

Pope Francis said Jesus turns their request for glory into a “cup” to drink and of a “baptism” to receive. “They too, like the other Apostles, will participate in his cross when their time comes.”

The Holy Father said Jesus is inviting the disciples to follow him and learn the way of love “at a loss”, that is, not for profit or earthly gain. “Our heavenly Father will take care of the reward,” he said.

Jesus, Pope Francis said, uses the episode to point out that service is the path to greatness in the Kingdom of God. “While the great of the Earth are building ‘thrones’ for their own power, God chooses an uncomfortable throne, the Cross, from which to reign, by giving his life.”

The Pope said all Christians are called to conversion away from self-seeking and honors.

“The way of service is the most effective antidote against the disease that comes from searching for the first place, which infects many people and does not even spare the Church.”

Finally, Pope Francis said the Gospel calls us to “bear witness with courage and generosity to a Church that kneels at the feet of the least, and to serve them with love and simplicity.”