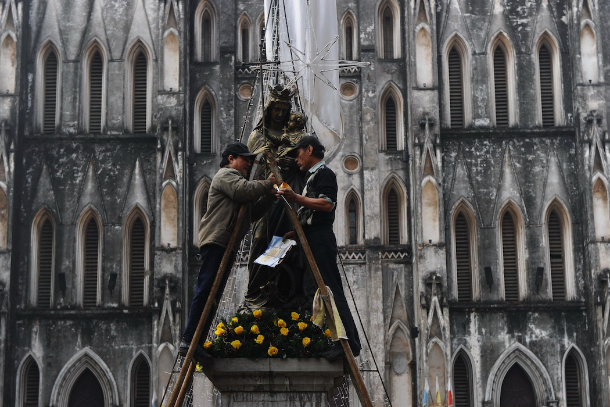 The construction of a state-run school on church property in the Vietnamese capital of Hanoi is being opposed by the local church.Hanoi Archdiocese leaders are concerned over the construction by state-run Trang An Elementary School on church-owned land opposite the main gate of the Archbishop’s House.Father Alfonse Pham Hung, head of Hanoi Archdiocese’s Office, said construction workers and equipment are on the site and that an iron-sheet fence has been erected around the property.The priest said the 2,700-square-meter site in the capital’s downtown area belongs to the archdiocese which has ownership papers. The local church has not offered, sold or transferred the property, church records said.The archdiocese had been using the old buildings on the property for educational activities.In a petition, Cardinal Archbishop Peter Nguyen Van Nhon and Auxiliary Bishop Lawrence Chu Van Minh described the construction as “unacceptable.”They added that in recent years the archdiocese has also sought for the return of Hoan Kiem School, which was formerly owned by St. Joseph Cathedral and the former nunciature. Both properties are next to the Archbishop’s House.Father Hung called on local Catholics to pray for the church’s services and interests to be guaranteed.Land conflicts in Vietnam are complicated issues because the communist government does not recognize private ownership of land.Ninety-five hospitals, schools and other facilities run by Hanoi Archdiocese were confiscated after 1954 when North Vietnam fell under the rule of the communists, according to church records.Hanoi Archdiocese has 320,000 Catholics, accounting for 3.7 percent of the capital’s total population. They are served by 155 priests and 500 religious