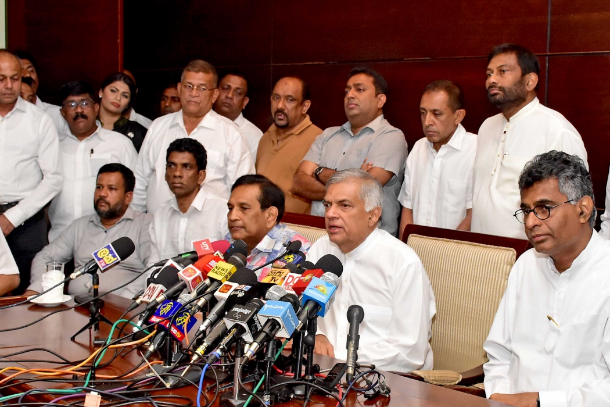 The shock replacing of Sri Lanka’s prime minister by presidential order has brought the island nation’s political turmoil out into the open.President Maithripala Sirisena sacked Ranil Wickremesinghe as prime minister on Oct. 26 in a move that broke up the coalition government and sent the country into a political crisis that has stoked fears of a possible bloodbath.According to media reports on Oct. 28, Sirisena said that one of Wickremesinghe’s cabinet members was conspiring to assassinate him. On Oct.26, he appointed ex-president Mahinda Rajapaksa as the country’s new prime minister. Rajapaksa — who ruled Sri Lanka from 2005 to 2015 — immediately began prime ministerial duties. Rajapaksa has been accused of human rights abuses and corruption during his previous time in power.Sirisena likewise suspended parliament and announced that the next session would not be held until Nov.16.Wickremesinghe said the president’s decision is illegal and unconstitutional. He has stressed that he remains the prime minister. His supporters were due to protest in the capital Colombo on Oct. 30.One of Wickremesinghe’s deposed ministers Arjuna Ranatunga tried to enter his office on Oct. 28 resulting in a clash that left one person dead.Parliament Speaker, Karu Jayasuriya, has urged Sirisena to ensure Wickremesinghe’s privileges as prime minister are protected until parliament resumes and makes a decision over his position. Jayasuriya said that continuing the prorogation of parliament until Nov.16 would have serious and undesirable consequences for the country.Rights groups have described the president’s move as a constitutional coup, and have urged him to summon parliament to end the political crisis and resolve the issue.Dr. Jehan Perera, political analyst and executive director of the National Peace Council, said the replacing of Wickremesinghe with Rajapaksa has plunged the country into a political crisis.”This crisis has been compounded by the proroguing, or suspension, of parliament for three weeks,” Perera told ucanews.com.”The dismissal of the prime minister at a time when he enjoyed majority support in parliament caught the country by surprise as it was not done in a transparent manner. It was done secretively which has led to it being described as a conspiracy,” he said.”Prime Minister Wickremesinghe’s refusal to accept the president’s action in sacking him is based on two factors. The first is that it is unconstitutional, second, is that it disregards the fact that Prime Minister Wickremesinghe enjoyed majority support in parliament at the time of his dismissal,” said Perera.Rights activist, Father Reid Shelton Fernando, said proper governance has been discarded.”The Unity Government had initiated many good proposals which were completely different from that of the former regime [of Rajapaksa],” said Father Fernando. “There was freedom to allow for dissent and several independent commissions were appointed.”The independence of the judiciary was asserted by making correct appointments as well not inferring with judicial actions of the courts.”

But the government came into power on an anti-corruption agenda which was not backed by action, Father Fernando said.”On the contrary the prime minister and his faithful group had to get involved in the central bank bond issue which was the biggest crime,” he said. “Civil society could not forgive them for this deal.”The Centre for Policy Alternatives (CPA), a Sri Lankan public policy and advocacy think tank, condemned what they described as the president’s unconstitutional power transfer. It said that only parliament has the constitutional authority to determine the continuation or a change of prime ministers.”It is astonishing and disappointing that a president elected with a mandate to strengthen constitutional democracy, the rule of law, and good governance has chosen this course,” the CPA said in a statement on Oct.29.The U.N. has called on the government to respect democratic values and constitutional provisions and processes, uphold the rule of law and ensure the safety and security of all Sri Lankans.The U.S., Britain and the European Union have also asked Sirisena to immediately reconvene parliament in consultation with the parliament’s speaker.