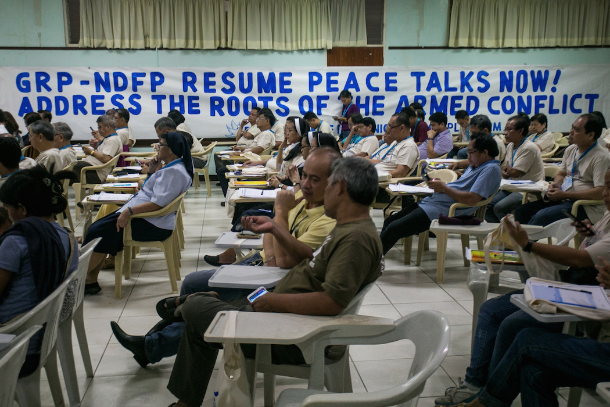 Religious groups and institutions in the Philippines need to be “more visible” in their work for peace, human rights, and social justice.This was the view of Archbishop Antonio Ledesma of Cagayan de Oro, who made the call during a three-day ecumenical summit on peace this week.The gathering of 130 Catholic and Protestant church leaders discussed the role of churches in the promotion of peaceand how to address the root causes of armed conflict.Archbishop Ledesma called on religious groups “to be visible and to be seen” in the “defense of human rights violation victims and in promoting peace and development for all.”The prelate said there is a need to go “deeper than just negotiations between peace panels,” referring to government peace talks with various armed groups in the Philippines.”We want to focus on the root causes of conflict to arrive at a just and lasting peace,” Archbishop Ledesma, co-convener of the Philippine Ecumenical Peace Platform.Bishop Felixberto Calang of the Philippine Independent Church said Christian churches should continue seeking a common stance on their role in the peace process.The prelate said the gathering was “a statement of our desire to amplify the call for principled dialogue.””At this low point of the peace talks, churches need to proclaim the victory of life over death, the triumph of just peace over senseless violence,” said Bishop Calang.Several attempts to resume peace negotiations between the government and communist rebels to end almost five decades of armed conflict have failed due to demands made by both sides.In her message during the meeting, Krister Fahlstedt, the United Nations regional coordinator on peace and development, appealed to the religious leaders to remain optimistic and let efforts “continue to be constructive.””Let’s strive to hold in high regard the importance and need for all parties, at all levels, to seek ways forward that will bring sustainable peace to the areas suffering the consequences of conflict today,” he said. Fahlstedt said the U.N. would continue “to stand ready to offer support to the peace process within our mandate and resources.”The gathering in Cebu City, which ended on Nov. 9, gathered representatives from the Association of Major Religious Superiors in the Philippines, the Catholic Bishop’s Conference of the Philippines, the Ecumenical Bishop’s Forum, the National Council of Churches in the Philippines, and the Philippine Council of Evangelical Churches.

English and Welsh Bishops to discuss Bible, Youth and Eucharist.