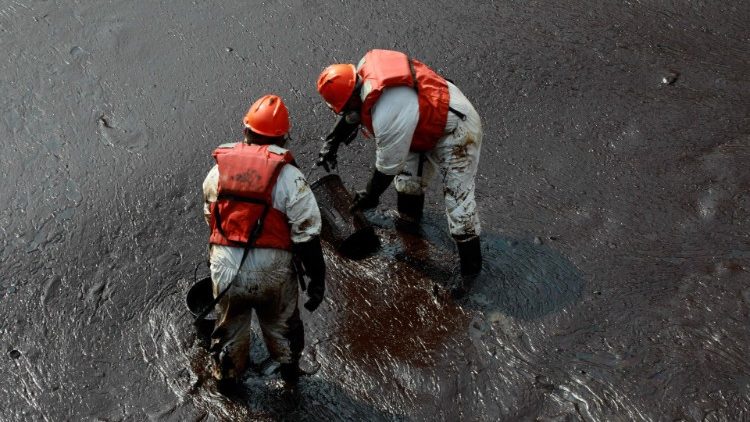 The Bishops’ Conference of Peru calls for efforts to counteract the effects of the massive environmental impact of an oil spill that leaked thousands of barrels of crude oil into the waters off the Peruvian coast.

The Bishops of Peru have stressed the need for swift action to remedy the enormous environmental damage caused by an oil spill that happened earlier this month off the Peruvian coast.

The 15 January spill, involving over 6,000 barrels of oil, occurred when a tanker unloading crude oil at the La Pampilla Refinery, managed by Spanish oil company, Repsol, was rocked by strong waves caused by a powerful volcanic eruption thousands of miles away in Tonga.

The spill dumped oil into the waters near the Ventanilla district, to the north of the Lima metropolitan region. Since then, oil has been found on the ocean and beach sands along the country’s coast, including the islands of Pescadores and Puntas Guaneras.

In their letter signed by President of the Peruvian Bishops’ Conference, Archbishop Miguel Cabrejos Vidarte OFM, the bishops highlight the “great concern and consternation” among the citizens for the ecological disaster “whose consequences have not yet been fully calculated.”

They also express regret that the spill has affected “two protected areas, the ecosystem of the place, the lives of hundreds of fishermen, the inhabitants of the area, as well as birds and plankton.”

Pointing out that “our rich biodiversity is a gift” and God commissioned man to cultivate and care for the earth that he made with fatherly love, the Bishops call on the actors involved to assume their responsibilities and urgently remedy the enormous environmental damage caused by the massive oil spill.

Following the spill, the Peruvian government last week declared a 90-day environmental emergency in damaged coastal areas affected by the incident. The authorities say that the measure will allow for sustainable management of the areas through restoration and remediation work.

Images on TV and social media showed blackened beaches, thick with oil, as well as dozens of dead seabirds and fish as workers continue in a clean-up campaign after the oil spill.

Peru has also demanded compensation from Repsol after what officials have described as the largest “ecological disaster” to hit the South American country in recent years.

Environment Minister Ruben Ramirez said on Monday that the government will temporarily suspend Repsol’s offshore oil unloading operations until the company “can offer technical guarantees that another spill will not happen.”

Meanwhile, a Peruvian Judge has issued an 18-month travel ban on four company executives of Repsol, barring them from leaving the country as officials investigate the massive coastal oil spill.

Pope at Audience: Communion of saints joins all Church’s members