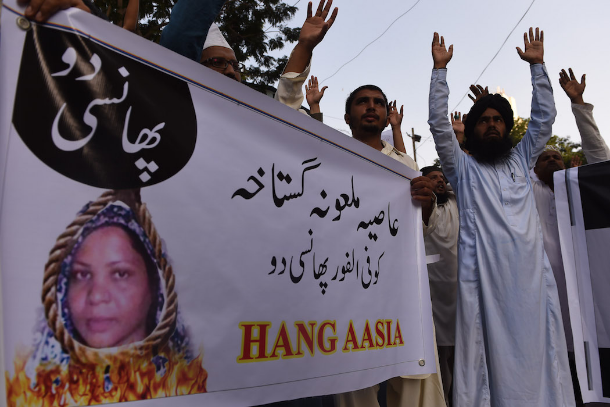 A file image of Pakistani protesters shouting slogans against Asia Bibi, a Christian woman facing death sentence for blasphemy, at a protest in Karachi on Oct.13, 2016. (Photo by Asif Hassan/AFP)

Zahid Hussain, Karachi
Pakistan
October 8, 2018
A hard-line Islamic group known for supporting Pakistan’s tough blasphemy law has warned against any release on bail of jailed Catholic woman Asia Bibi.The nation’s Supreme Court earlier announced that it would consider the issue of bail pending hearing of an appeal by the Catholic mother of five against a death sentenced imposed by a trial court in 2010.She was found guilty of making derogatory remarks about Prophet Mohammed during an argument with a Muslim woman while working in a field.In 2014, the High Court in Lahore, capital of Punjab province, upheld the death penalty.Two high-profile politicians, then Punjab governor Salmaan Taseer and minorities minister Shahbaz Bhatti, were assassinated in 2011 after calling for reforms to the blasphemy law.According to a media release issued by the Supreme Court of Pakistan on Oct. 5, a three-member bench headed by Chief Justice Mian Saqib Nisar and comprising Justice Asif Saeed Khosa and Justice Mazhar Alam Khan Miankhe, would begin hearing Asia Bibi’s appeal this week.If her appeal is rejected by the Supreme Court, she is expected to ask the nation’s president for clemency.Meanwhile, in a statement on the evening of Oct. 7, Tehreek-e-Labaik Pakistan (TLP), a religious-turned-political group, called for the execution of Asia Bibi.TLP head Khadim Hussain Rizvi said that justice should be done as per the blasphemy law without caving-in to pressure from “anti-Pakistan NGOs” and Europe.”If any concession or leniency was shown towards high court-certified blasphemer Asia Bibi or any attempt was made to send her abroad, it will lead to very serious consequences,” he warned.He said that a country which came into being in the name of Islam should not trade any foreign loans for the “sanctity of Holy Prophet”.The TPL chief urged his workers and office bears to attend the next court hearing.Breaching of the communally sensitive blasphemy law can result in a penalty of up to life imprisonment or execution.Unproven allegations, or even just rumors, can result in blasphemy charges being laid.Rights’ activists in Pakistan complain that the law is often used to settle personal scores or victimize religious minorities
Share FacebookTwitterGoogle+WhatsAppPinterestEmail

Open letter by Card. Marc Ouellet on recent accusations against the Holy See