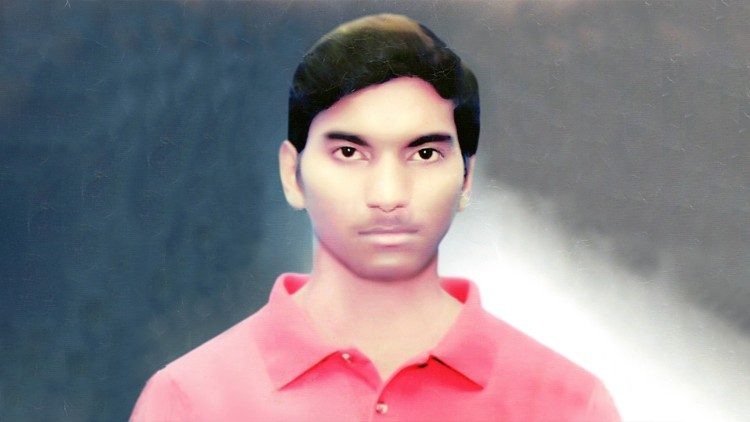 Akash Bashir, a lay Catholic and former pupil of Don Bosco Technical Institute of Lahore, became a martyr in his bid to prevent a suicide bomber from entering a packed church in 2015.

The Catholic Church of Pakistan now has its first official candidate to sainthood and martyrdom, a young victim of a suicide bombing who prevented an even larger massacre.

Celebrating the feast of St. John Bosco on Monday, Archbishop Sebastian Shaw of Lahore announced that the Vatican has accepted the cause of Akash Bashir’s martyrdom, UCA News reported. The title ‘Servant of God’ is given to a candidate at the beginning of the sainthood process at the diocesan level.

Pakistani Catholics have begun praying for the intercession of the first Servant of God and martyr from the overwhelmingly Muslim nation.

“A great day for the Catholic Church in Pakistan. He offered his life as a sacrifice to save the lives of the Christian community at St. John’s Catholic Church, Youhanabad, Lahore,” said Vicar General of the archdiocese, Father Francis Gulzar, in a statement. “He is the first Pakistani Christian who has been raised to the rank of the Holy People of God.”

Born on 22 June 1994 in Risalpur, Nowshera, Khyber-Pakhtunkhwa province, Akash died a martyr at the age of 20.

On 15 March 2015, two suicide bombers blew themselves up near St. John’s Catholic Church and the nearby Christ ‎Church of the Church of Pakistan in Lahore’s predominantly Christian neighbourhood of Youhanabad, as the faithful were gathered inside for Sunday worship during Lent.‎

“I will die but I will not let you go in,” were his words as he confronted the terrorist strapped with explosives. The attacker detonated the bomb, instantly killing himself, Bashir and 2 others outside the church packed with over 1,000 faithful, thus preventing a large-scale carnage.

Pope Francis was quick to denounce the terror attacks.

“Dear brothers and sisters, with sorrow, with much sorrow, I learned of today’s terrorist attacks on two churches in the city of Lahore, Pakistan, which caused many deaths and injuries,” he said, hours later at the midday Angelus prayer that day. “They are Christian churches. Christians are being persecuted. Our brothers and sisters are spilling their blood solely because they are Christians,” he lamented. “While I assure the victims and their families of my prayers, I ask the Lord, I implore the Lord, source of all goodness, the gift of peace and accord for that country; may there be an end to this persecution of Christians, which the world tries to hide, and may there be peace,” the Pope added.

Some 40 Christians were later jailed following the lynching of two Muslims who were suspected of being involved in the attacks.

Akash’s father, Bashir Emmanuel, said he didn’t know about the latest development regarding his son. “One of my sons shared that there is a special Mass at the church,” he told UCA News. “Akash symbolizes the strength of the Christian faith in our country. I pray for the clearance of all steps to sainthood.”

Archbishop Emeritus Lawrence Saldanha of Lahore congratulated the community. “When there is so much sad news, this news is very joyful. Akash remains a great model of a modern martyr. May he inspire and encourage all young people,” UCA News reported him as saying in a Facebook post.

The family of Servant of God Akash Bashir, along with a priest.

The cause of sainthood is a long and rigorous process that takes several years. Documenting the life and virtues of a holy person or martyr cannot begin until 5 years after death. However, the Pope can waive this waiting period, as has been the case of Mother Teresa and Pope John Paul II.

After the 5-year wait, the bishop of the diocese in which the individual lived petitions the Holy See to allow the initialization of the sainthood process. If there is no objection by the Vatican, namely the Congregation for the Doctrine of the Faith, the permission, or nihil obstat (“nothing stands in the way”), is communicated to the initiating bishop.

Salesian news agency ANS reported that the Vatican Congregation for the Causes of Saints on 9 November 2021 authorized Lahore Archdiocese to open the cause of the martyrdom of Akash.

In the diocesan phase of the process, the candidate is conferred the title ‘Servant of God’, which is the case of Akash. This stage includes gathering of testimony on the life and virtues of the Servant of God. Also, the public and private writings must be collected and examined.

This documentary phase can take many years and concludes with the judgment of a diocesan tribunal, and the ultimate decision of the bishop, that the heroic virtues of the Servant of God have or have not been demonstrated.

At the end of the diocesan process, the results, along with the bound volumes of documentation, or Acta (Acts), are communicated to the Vatican Congregation for the Causes of the Saints, where they are processed by a group of experts, who conclude that the evidence collected is sufficient and reliable to prove the candidate’s holiness or martyrdom.  A group of theological experts examines the documents, which prove both the “odium fidei” [hatred of the faith] on the part of the persecutors and its acceptance on the part of the candidate.

At the end of this stage, the Pope authorizes a decree on the heroic virtues of the candidate, conferring on him or her the title ‘Venerable Servant of God’.

For final sainthood, when the person is officially declared a saint at a canonization ceremony, another miracle through the person’s intercession has to be proved, including for the martyr candidate.