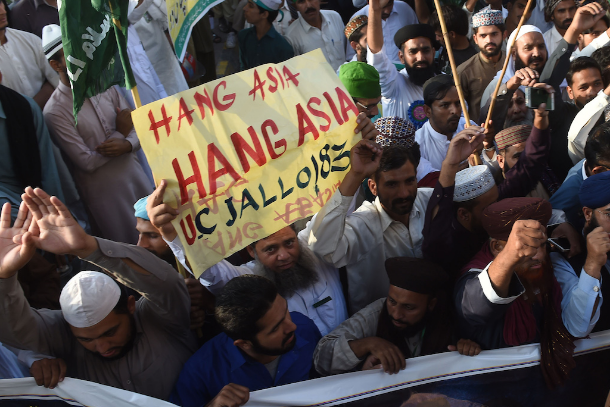 Pakistan’s Supreme Court has set aside the death sentence for blasphemy of Catholic woman Asia Bibi and ordered her release from prison.The mother of five was sentenced to death in 2010 on charges of making derogatory remarks about the Prophet Muhammad during an argument with a Muslim farm worker.A three-member court bench comprising Chief Justice Saqib Nisar, Justice Asif Saeed Khosa and Justice Mazhar Alam Khan announced the verdict on Oct. 31.The apex court ruled that Bibi be released from death row immediately if she had no other case registered against her.The Supreme Court had reserved its judgment on the blasphemy case on Oct. 8 and had barred electronic and print media from covering the issue until the decision was announced by the court.Samson Salamat, the Christian chairman of the interreligious Rawadari Tehreek (Movement for Tolerance), issued a press statement after the verdict.”This is a highly tense and threatening situation for religious minorities, especially for Pakistani Christians, and there is fear of persecution of Christians and attacks on their churches and other properties,” he said.”Therefore, we call upon the government of Pakistan and the Supreme Court to take notice of the threats made by [Tehreek-e-Labaik leader] Khadim Rizvi and his group prior to the announcement of the Asia Bibi verdict.”We also call for a ban of Tehreek-e-Labaik and all similar extremist groups who are involved in hate speech and use religion as a tool to promote violence in society.”We also call upon the government and law enforcement agencies to beef up security and ensure the deployment of military troops to safeguard the lives and property of religious minorities, especially the Christian community.”Rizvi recently warned the judges, the government and local as well as international non-government organizations of “dire” consequences if Bibi was set free. He also threatened Saiful Malook, the lawyer representing Bibi in court.”We will hold massive protests and not let the government function if it releases Asia Bibi to appease the United States,” said Rizvi.

Poverty caused by evils as old as humanity, says pope