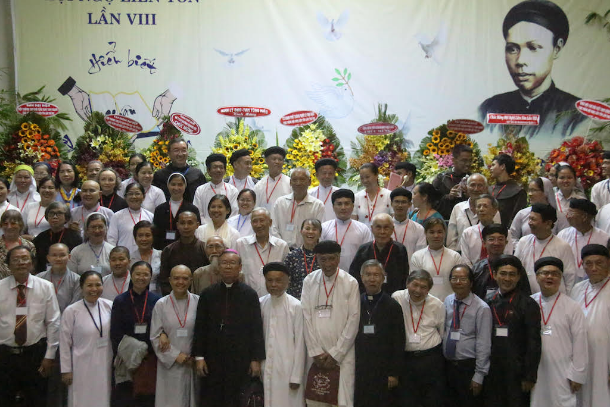 Participants in an interfaith gathering in Vietnam complimented religious leaders and Catholic intellectuals on their contributions to serving people.

Some 300 leaders and followers from seven religions attended the annual interfaith gathering at the Pastoral Center in Ho Chi Minh City on Oct. 27.

Bishop Stephanus Tri Buu Thien of Can Tho, who is in charge of interfaith dialogue and ecumenism for the Vietnamese bishops, was present at the event organized by the Ministry of Interfaith Dialogue Committee of Ho Chi Minh City Archdiocese.

In his opening speech, Bishop Thien said the meeting aimed to commemorate three ancestors who made great contributions to the country and religions.

They included Archbishop Paul Bui Van Doc, who died in March during a Rome visit, and clergyman Hue Y, secretary-general of domestic faith Cao Dai, who died in April.

Both religious leaders were “very fond of encouraging meetings and cooperation among religious representatives so as to bring positive advantages to people,” Bishop Thien said.

Participants watched a video clip depicting Ky’s life and activities before representatives talked about relations between science and religion and the importance of knowledge and studies in religious life.

Buddhist nun Thich Nu Huong Nhu expressed her great admiration for Ky’s talents and morality. She praised him for bringing civilization, knowledge and humanity to Vietnam.

During the five-hour gathering, participants saw photos of interfaith activities and prayed for peace, love, forgiveness, common good, good health and weather in the world and among religions.

Father Francis Xavier Bao Loc, head of the Ministry of Interfaith Dialogue Committee, said the annual interfaith meeting is an opportunity for followers to understand one another’s faiths.

“When we share our knowledge with other people, we will receive useful things from them. Consequently, we widen our understanding and work for the common good,” he said.

Nguyen Thanh Phong, a Hoa Hao follower who attended the gathering for the first time, said the event brought solidarity and fraternity to followers.

Poverty caused by evils as old as humanity, says pope