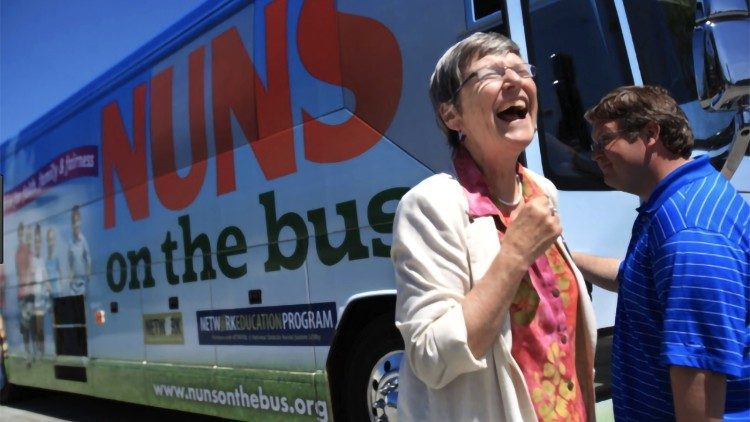 But one thing is for sure: there will be more women in power!

Results saw Democrats winning control of the House of Representatives and Republicans keeping a majority in the Senate.

The real outstanding result is that after this vote, the future for women in US politics is looking brighter and stronger.

As Sister Simone Campbell, leader of the “Nuns on the Bus” Network Lobby for Catholic Social Justice explained to Sr. Bernadette Reis, 118 women will serve in the 116th Congress, bringing the share of women legislators to at least 22 percent.

Sister Simone admits she is “really excited!”.  She says she has been following mainly at the Federal level and explains that as per the members Congress, “in our House Representatives there are going to be over 100 women in the House which is a historic high” elected from both parties.

It is also exciting, she says, that approximately 40% of those women are women of colour: “For the first time we are going to have 2 Native Americans representatives in Congress. It’s shocking it never happened” as well as  2 Muslim women.

Sister Simone also points to a wide diversity of professions among them, “including teachers, small business owners, women who have been involved in women’s rights issues, lawyers with a family perspective”.

“It’s really a diverse group bringing other powerful views to the legislative process. I think American people are going to be better represented for it” she says.

The impact of Nuns on the Bus

Asked whether she thinks the “Nuns on the Bus” network lobby had an impact on the vote, sister Simone says: “I think we helped!”

She explains that during the nuns did 12 lobby visits during the bus trip, and during that trip some members of the congress were defeated while others – with policies that are more focused on the needs of family, healthcare and a better tax policy – came to the fore.

“It’s clear that the bus helped! We can’t claim credit for all of it” she says.

Sister Simone also speaks of how coming from the faith perspective of the sisters “we know that lifting up the issues of the common good – of what Pope Francis talks about – about caring for those most at the margins” is a powerful message that really engages the  public.

She says the nuns have more to do but it was a significant step.

“Nuns on the Bus” tour

The tour, “On the Road to Mar-a-Lago” included 54 events in 21 states over the course of 27 days. It  aimed to hold members of Congress accountable for their votes on the 2017 Tax Bill and the many attempts to repeal the Affordable Care Act

Sister Simone speaks of the trip as of a powerful time for the sisters on the trip and for the staff “that help us do it”.

Every day, she says, “we gather for prayer, for silent reflection and then share a prayer or reflection on the day ahead or on the people we have met: we ground it in Pope Francis’ writings, especially the ones on holiness”.

His exhortation on holiness, Sister Simone adds, was at the heart of our tour: “he talks about how holiness is grounded in boldness and passion, it is grounded in community, in perseverance…it’s those qualities that are necessary for staying engaged in the political reality”.

Ultimately, Sister Simone says “What it did for us, was to renew my spirit and the spirit of the sisters we were with: it was a quite a powerful experience of community in a broad national trip”.