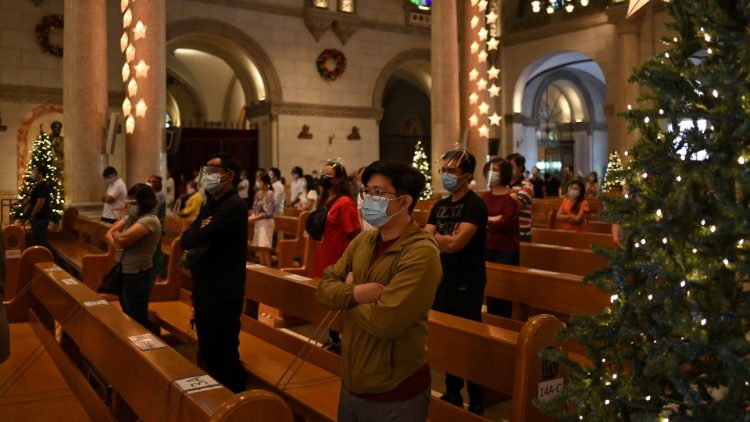 In his first Christmas in the Philippines, the Holy See’s new Apostolic Nuncio urges Christians to strive to live a life of greater simplicity in imitation of the Babe of Bethlehem.

The birth of Jesus in a stable teaches that “God chooses the simple people”.  “And I think all of us need to ask for the gift of simple faith, the gift of faith of the poor,” said Archbishop Charles John Brown, the new Apostolic Nuncio to the Philippines.

He made the point in his homily during the Christmas Eve Mass at the Abbey of Our Lady of Montserrat in the capital Manila.

The fact that God chooses the simple and humble over the outstanding, he argued, is not arbitrary or not without reason. God prefers the poor because they rely on God “and their faith is more immediate, more real”.

“When we become rich and sophisticated, in a certain sense, we don’t have that immediate dependency on God for everything,” said Archbishop Brown, who was appointed the Holy See’s ambassador to the Philippines on 28 September.

He noted that “it’s easier for us to think that we are self-sufficient, that we are in control, that we don’t need God”.  “And that is the tragedy of richness and sophistication.”  The Holy See diplomat also emphasized that God’s kingdom is for the poor in spirit, not those who place their trust in the comforts of this world.

As in most countries around the world, Christmas season celebrations have been restricted also in the Philippines because of the Covid-19 pandemic.  Around 100 people were present inside the church for the Christmas Eve Mass, including some staff of the apostolic nunciature.

Archbishop Brown arrived in the Philippines on his new mission on 29 November, to take over from Italian Archbishop Gabriele Giordano Caccia, whom Pope Francis had earlier appointed the Holy See’s Apostolic Nuncio and Permanent Observer to the United Nations in New York.

The 61-year old US archbishop began his diplomatic mission to Asia’s most-populous Catholic country after he presented his credentials to President Rodrigo Duterte in a virtual ceremony at the presidential palace in Manila on 14 December.

On Christmas Day, 25 December, while celebrating his first Mass at Manila Cathedral, he conveyed the Pope’s Christmas wishes to the people.

“I bring you, of course, the Christmas greetings of our Holy Father Pope Francis, who has a very special place in his heart for you, for the Filipino people,” he said before the homily.

He urged Catholics to live their faith and share it with others. “Here on earth, our job is to live in a way that nourishes God’s lights in us and in others by being compassionate, by following the teachings of Jesus and His Church,” he said.

Archbishop Brown noted the earthquake that occurred on Christmas morning in Batangas and asked the faithful to pray for the safety of residents there. Reminding parishioners to observe health protocols against Covid-19, he also sought prayers for an end to the pandemic.

“We also pray to God for an end to the scourge of the coronavirus, which has certainly affected the way we live and the way with which we interact and indeed the way we pray,” Archbishop Brown said.