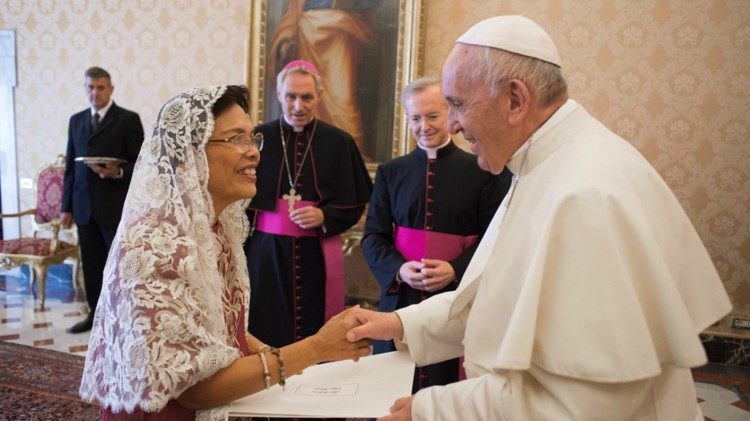 Pope Francis on Saturday welcomed to the Vatican the new ambassador of the Philippines to the Holy See, Ms. Grace Relucio Princesa.  At the formal ceremony in the Vatican, the 62-year old diplomat presented her credentials to the Pope at the start of her diplomatic mission to the Holy See.

Born on 20 January, 1956 in Ligao (Albay – Philippines), Princesa is a widow and mother of five children.

A diplomat for nearly 3 decades, she is a graduate in International Relations (University of the Philippines, Diliman, 1977) and has a Master’s degree in Migration Studies (Miriam College, Quezon City, Philippines 2016).

Philippine President Rodrigo Duterte appointed Princesa as Philippine Ambassador to the Holy See in January,  a move the Catholic Bishops’ Conference of the Philipppines welcomed.  Her appointed was later approved by the bicameral Commission on Appointments.

1979-1986 – Official at the Ministry of Human Settlements in Manila

2010          – and Permanent Representative to the International Renewable Energy Agency – IRENA

US halts funding to UN agency for Palestinian refugees