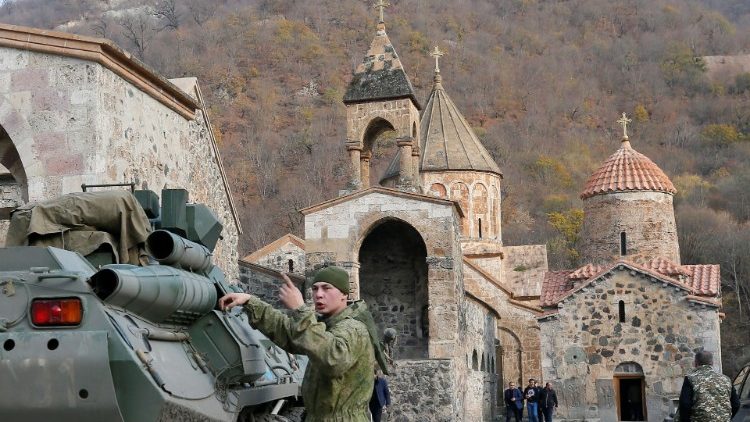 A statement issued by the Middle East Council of Churches calls on Armenia and Azerbaijan, as well as on international stakeholders to ensure that a recent ceasefire for the disputed Nagorno Karabakh region holds.

The agreement of 10 November which ended the bloody armed conflict in Nagorno Karabakh “does not ensure a clear and sustainable and long-lasting peace for the region”, said the Middle East Council of Churches (MECC) in a message released this week as it called for guarantees for sustainable peace.

MECC, that was founded in 1974, aims to facilitate the convergence of Middle Eastern Christian communities on issues of common interest and to help overcome confessional conflicts. Some thirty Churches and ecclesial communities adhere to the organization, representing Catholics, Orthodox, Eastern Orthodox (which also includes the Armenian Apostolic Church) and Evangelicals.

The Council of Churches described the Russia-brokered deal that was reached as “an arrangement loose enough to maintain a tense coexistence with no reliable foundation for more durable peace.”

Reasserting its identity as a “faith-based organization with the reconciliatory mission to bring warring peoples and groups together through dialogue,” MECC called on the parties concerned and on international stakeholders to ensure that a ceasefire is first of all guaranteed, in order to save the lives of thousands of people from danger.

Furthermore, the MECC, which includes among its founding members the Armenian Churches, expressed concern for religious freedom and practice of faith and for the fate of people “who may be subject to all sort of retaliations”.

In the statement MECC pointed to the responsibility of the international community that, it said, must also monitor the fate of churches and monasteries which represent “the soul and the stone” of this region, an area of historic settlement for Armenian Christians.