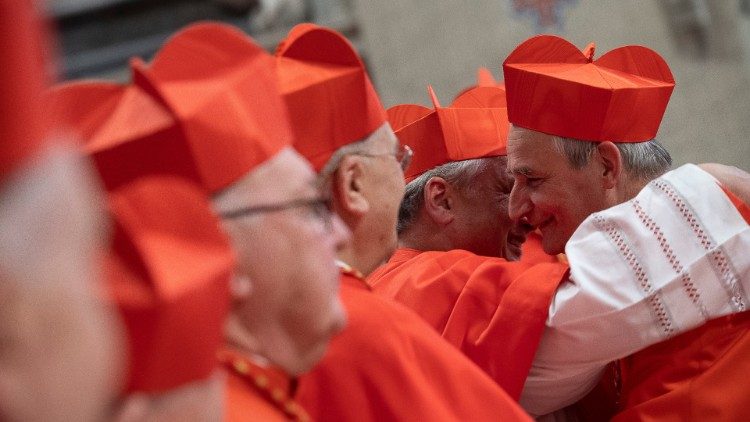 The Vatican confirms that two Cardinals-designate will not be present in Rome on Saturday to receive their red hats from Pope Francis.

Coronavirus will not stop the Consistory, but it will change its modus operandi. For the first time in history, on 28 November 2020, not all the Cardinals-designate chosen by Pope Francis will be present, in person, to receive their red hats.

The Holy See Press Office said on Monday that Cardinal-designate Cornelius Sim, the Apostolic Vicar of Brunei, and Cardinal-designate Jose F. Advincula of Capiz, in the Philippines, would not be able to attend the Consistory in the Vatican because of travel restrictions related to the coronavirus pandemic.

They will instead, join the celebration, participating remotely from their dioceses, through a digital platform that will allow them to connect with St. Peter’s Basilica.

Press office director, Matteo Bruni, also said that a representative of Pope Francis would present them with the red hat – the “biretta” – the cardinal’s ring and title connected with a Roman parish “at a time to be decided later”.

He added that existing members of the College of Cardinals who are unable to travel to Rome for the Consistory would be able to follow the ceremony via a livestream.

Small congregation and no congratulatory visits

The ordinary public Consistory for the creation of new cardinals will take place on Saturday afternoon at the Altar of the Chair in St. Peter’s Basilica, with a limited congregation. Each new Cardinal will only be allowed to bring a few guests or family members.

What’s more, they will not follow the custom of receiving well-wishers in the Apostolic Palace and in the Paul VI Hall after the ceremony.

The new Cardinals will concelebrate Mass with Pope Francis in St. Peter’s Basilica on Sunday, 29 November.

The Italian names on the list are those of Archbishop Augusto Paolo Lojudice; Fra Mauro Gambetti, Custos of the Sacred Convent of Assisi; Bishop Marcello Semeraro; Capuchin Fr. Raniero Cantalamessa, Preacher to the Papal Household since 1980.

Alongside Cantalamessa, the Pope has also named three others who will receive the biretta but will be unable to vote in Conclaves because they are over 80 years of age. They are Bishop Emeritus Felipe Arizmendi Esquivel of San Cristóbal de Las Casas, Chiapas, Mexico; Archbishop Silvano Maria Tomasi, Permanent Observer Emeritus to the United Nations Office and Specialized Agencies in Geneva; and Msgr. Enrico Feroci, parish priest of Santa Maria del Divino Amore in Rome.