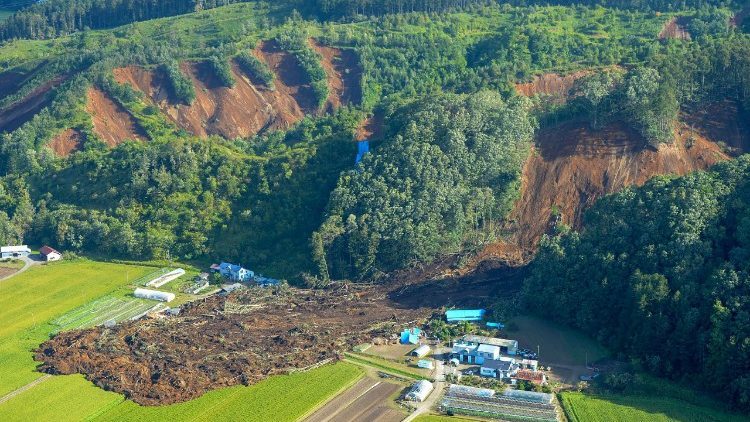 Most of those killed in the latest calamity of what is being described as Japan’s deadly summer were overwhelmed by massive landslides that crushed houses under torrents of dirt, rocks and timber.

Rescuers are frantically searching for survivors and officials have confirmed at least 366 people were injured in the 6.7 magnitude earthquake that jolted residents from their beds just after 3 in the morning.

Nearly 3 million households are without power or water and power cuts have paralysed businesses in northern Hokkaido, immobilized trains and airports and shut down phone systems.

The quake is only the latest in a dramatic run of natural disasters for Japan which has suffered deadly floods, typhoons, earthquakes and heat in the past few months.

In some of the worst quake-hit areas, where entire hillsides have collapsed, rescuers are using backhoes and shovels to search for survivors under tons of earth

Twenty-eight people remained unaccounted for in the town of Atsuma which is providing emergency meals for up to 2,000 people and shelter for more than 500.

The island’s only nuclear power plant, which was offline for routine safety checks, temporarily switched to a backup generator to keep its spent fuel cool.

Nuclear regulators assure there is no sign of abnormal radiation. This is an urgent concern after a massive quake and tsunami in March 2011 in northeast Japan destroyed both external and backup power to the Fukushima nuclear plant, causing meltdowns.

Japan is used to dealing with disasters, but the calamities of the last few months are putting a huge strain on emergency operations and have highlighted the country’s heavy reliance on vulnerable power systems.