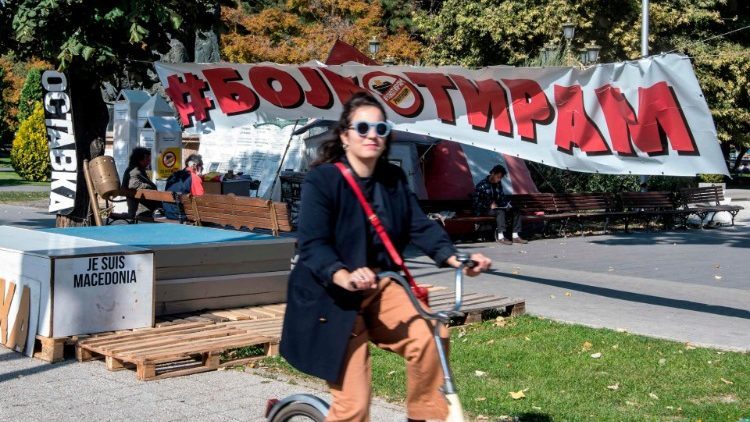 The outcome of Sunday’s referendum in Macedonia is closely watched in neighboring Greece, a key NATO and European Union member. It has long blocked Macedonia’s efforts to join the alliance saying that use of the term “Macedonia” implies territorial ambitions on its own province of the same name. That province is the birthplace of the ancient warrior-king Alexander the Great, a hero in Greek history.

The name dispute broke out in the early 1990s when the small Balkan country declared independence from the former Yugoslav federation.
It escalated quickly, with Athens imposing a crippling embargo on the new nation.

After decades of internationally mediated talks, changes in the Macedonian government in 2017 rekindled hopes that a solution could be found.
Under a deal reached in June, Macedonia will change its name to North Macedonia, and Greece will drop its objections to the country joining NATO.

But that will only happen if voters back the agreement.

They are asked: “Are you in favor of membership in the European Union and NATO by accepting the deal between (the) Republic of Macedonia and Republic of Greece?” If Macedonians vote “Yes,” their country can then become NATO’s 30th member.

But if it’s up to Macedonia’s president, Gjorge Ivanov, people will boycott the referendum. “Every citizen has the right to decide how to act as regards this referendum – to go out and vote, or stay home and boycott.

“If this referendum succeeds following the law, then not only will the name of the real country be changed, but a new, semi-sovereign state will be created, with a new name and a new internal and international legal identity,” he added. “We will be a state only by name, but not in substance, because others will regulate our way of life.”

However, Macedonia’s Prime Minister Zoran ZAEV supports the referendum. He says it is the best way to secure a prosperous future for his nation of just over 2 million people. “This is not an easy decision,” Zaev told European legislators earlier this month.

“We all know that this is a once-in-a-lifetime opportunity…And we will cease that opportunity because this is our tickets for joining the European Union and NATO,” the prime minister stressed.

Pope Francis invites the faithful to pray the Rosary in October