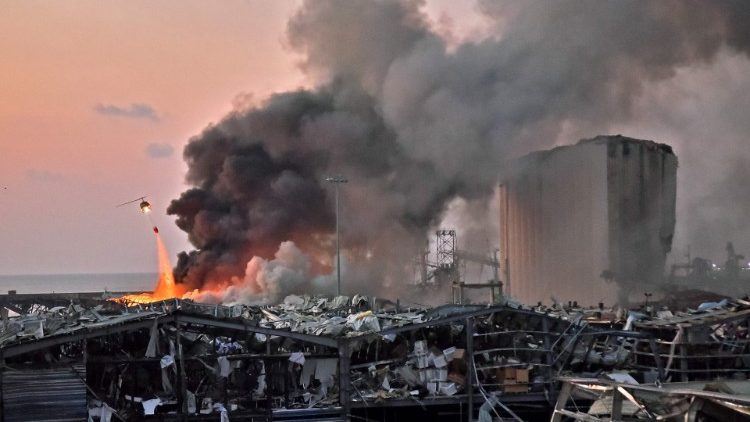 A huge explosion on Tuesday afternoon near the centre of Beirut kills at least 100 people and causes extensive damage to the Lebanese city.

The blast, which happened at 6.10pm local time, tore through Beirut Port leaving a trail of devastation.

As Wednesday dawned, rescue workers continued to sift through the wreckage looking for those missing after the explosion.

Lebanon’s Red Cross chief, George Kettani, said: “What we are witnessing is a huge catastrophe. There are victims and casualties everywhere.”

At least 4,000 others were injured, with the number of casualties expected to rise.

According to reports, the explosion was caused by tons of ammonium nitrate stored in a warehouse in the port, on the Mediterranean coast.

The chemical is used in fertilisers and bombs, and had been sitting in storage for years without safety measures.

The blast was so loud that it was clearly heard across the Mediterranean on the island of Cyprus, some 200 kilometres away.

Speaking to the press, the Lebanese Prime Minister Hassan Diab urged “friendly countries” to help overcome the repercussions of the explosions.

Furthermore, Lebanese President Michel Aoun will chair an emergency meeting of the Higher Defence Council to analyse the reasons and repercussions behind the incident.

Many countries in the region expressed solidarity with Lebanon, which has dealt a further blow as it grapples with the Covid-19 pandemic and a severe economic crisis.