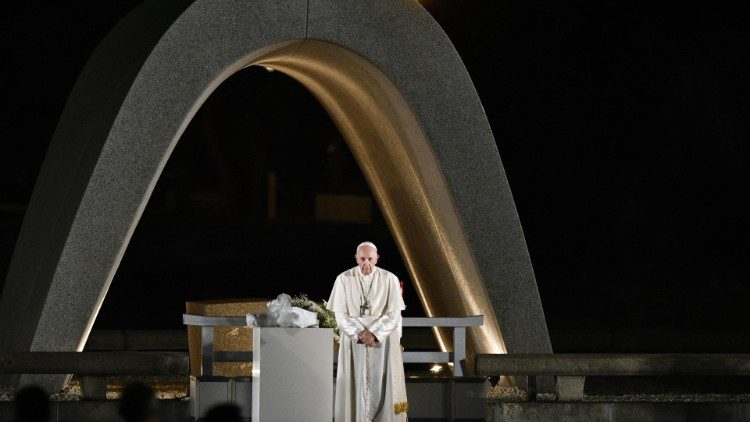 Pope Francis writes a message to the Governor of the Hiroshima Prefecture on the 75th anniversary of the Hiroshima bombing, expressing his closeness and calling for an end to the use of nuclear weapons.

Pope Francis expressed his closeness to the people of Japan on Thursday, to mark the 75th anniversary of the nuclear bombing of Hiroshima which took place during the Second World War.

In a message sent Thursday to the Governor of the Hiroshima Prefecture, Hidehiko Yusaki, the Pope offered his “cordial greetings to the organizers and participants in the seventy-fifth solemn anniversary of the nuclear bombing of Hiroshima in 1945, and in a special way to the hibakusha survivors of the original tragedy.”

The Pope also recalled that he was able to reflect on “the destruction of human life and property” at the Peace Memorial in Hiroshima and at Hypocenter Park in Nagasaki during his Apostolic Visit to the two cities in November 2019.

Pope Francis said that just as he came to Japan last year as a pilgrim of peace, he holds in his heart “the longing of the peoples of our time,” especially of young people “who thirst for peace and make sacrifices for peace.”

He also expressed his closeness to the poor “who are always among the first victims of violence and conflict.”

Recalling his message at Hiroshima in 2019, Pope Francis said that “the use of atomic energy for purposes of war is immoral, just as the possessing of nuclear weapons is immoral.”

For peace to flourish, therefore, “all people need to lay down the weapons of war, and especially the most powerful and destructive weapon: nuclear arms that can cripple and destroy whole cities, whole countries,” the Pope said.

Pope Francis turned his thoughts towards the “bomb-affected-people” referred to as hibakusha.

Many of them, survivors of Hiroshima and Nagasaki, suffer from horrifying effects of the bombings including radiation poisoning and psychological trauma.

Pope Francis prayed that their prophetic voices might serve “as a warning to us for coming generations.”

“To them, and to all who work for reconciliation,” said the Pope, “we make the words of the psalmist our own: ‘For the love of my brethren and my friends. I say: Peace upon you!” (Ps 122: 8)

Concluding his message, Pope Francis invoked “abundant divine blessings” upon all who commemorate the solemn anniversary.

CDF: Baptisms conferred with arbitrarily modified formulas are not valid

UN agencies appeal for the disembarkation of migrants on rescue ships

India’s Catholics called to stand in solidarity with poor