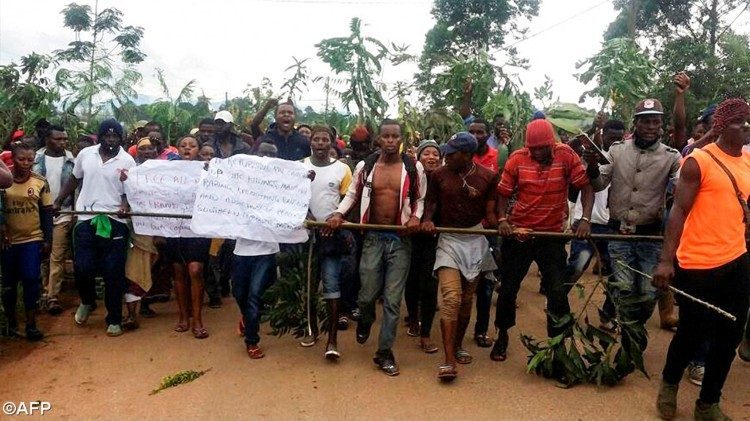 Fonki Samuel Forba, the leader of Cameroon’s Presbyterian Church, told reporters the 79 released children, aged between 11 and 17, “look tired and psychologically tortured.” He said he has pleaded with the kidnappers to “free the staff still in their keeping.”

Forba also said he has asked parents and guardians to take home all 700 students of Bamenda’s Presbyterian Secondary School as, he said, “Their security is not assured by the State, and they are constantly under threat by armed groups who attack and kidnap them.”

It is not the first time students have been kidnapped from this, and from other schools in the region, but Forba said the Church cannot afford to continue paying ransoms.

The unrest in Cameroon’s northwest and southwest areas is caused by Anglophone separatist militants – the so-called Amba boys – who are protesting economic and political exclusion by Cameroon’s French-speaking majority.

It’s where about one fifth of the entire Cameroonian population lives and for decades the English speakers have complained of lack of investment and development by the French speakers, including Paul Biya who has been President for the past 36 years.

In the past year, hundreds have been killed and over 200,000 have been displaced in fighting between government forces and separatists who have vowed to destabilize the regions as part of a strategy for creating a breakaway state, which – they say – will be called Ambazonia.

The separatists have also attacked civilians who do not support their cause, including teachers some of whom were killed for disobeying orders to keep schools closed.

In view of Presidential elections last October, religious leaders of Cameroon, including the President of the nation’s Catholic Bishops’ Conference, appealed to the government and to political parties to address the problems and give priority to resolving the crisis in the impoverished north-west and southwest regions.

It is good news of course that the students have been released, but with so much injustice and unresolved conflict in surrounding areas, there is bound to be more violence and more death before anyone takes any notice