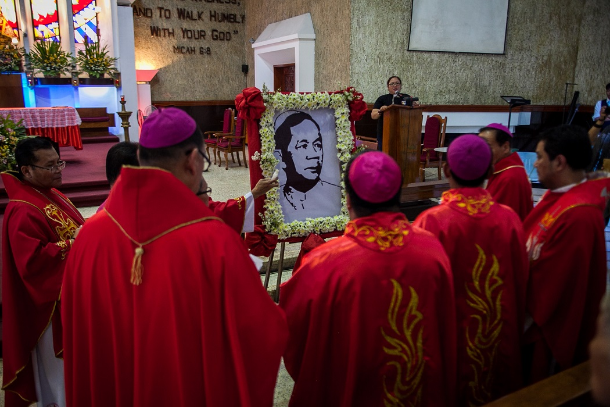 Justice remains elusive for Bishop Alberto Ramento of the Philippine Independent Church 12 years after he was murdered on Oct. 3, 2006.The culprit or culprits have never been caught.The family of the slain prelate said there have been times when they came close to losing hope.”But we will not stop fighting until justice is served,” said the bishop’s son, Alberto Ramento II.”Our call for justice is not just for my father.”It is also for other victims of extra-judicial killings in the country.”The bishop was found dead inside his rectory in the city of Tarlac, north of Manila, with six stab wounds.Police ruled the killing as a case of robbery and homicide, but the family believes the prelate’s death was related to his human rights’ advocacy.Bishop Ramento, an outspoken critic of political leaders in the Philippines as well as various government agencies, took up the cause of farm workers who complained over labor rights’ abuses.The slain bishop led ecumenical movements and faith-based rights groups as well as being the chairman of the National Council of Churches of the Philippines.He also served as Supreme Bishop of the Philippine Independent Church from 1993 to 1999.He was bishop of Tarlac and head of the Supreme Council of Bishops at the time he was killed.In a gathering to mark the prelate’s death anniversary, church leaders and human rights advocates vowed to continue his legacy as a “strong voice of conscience.””We are here to celebrate his life as a missionary who stood for the poor and the oppressed,” Bishop Joel Porlares, the church’s secretary general, said.Father Jonash Johojoy, executive director of the Ramento Project for Rights Defenders, said Bishop Ramento was killed because he chose to fight for the rights of people who were neglected