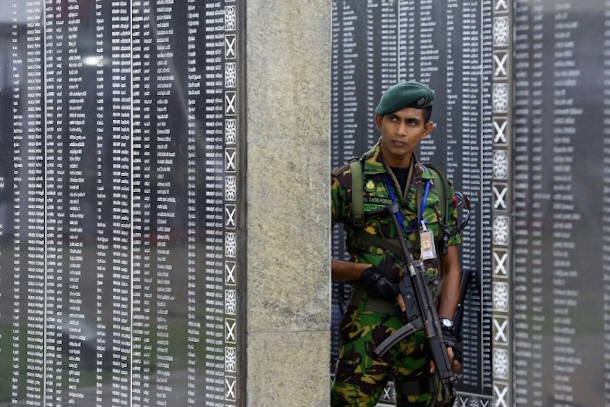 Just before the end of Sri Lanka’s 1983-2009 civil war, police were searching for a man called “Aranadhan” (a pseudonym) whom officials had accused of assisting the Liberation Tigers of Tamil Eelam (LTTE).Aranadhan, a Sri Lankan Tamil who declined to give his real name to protect his safety, was arrested when police conducted a body search of his friend, 31-year-old Arumugan, in Kilinochchi, the LTTE’s administrative center until 2009.Both men were arbitrarily arrested on suspicion of supporting the LTTE but Arumugan was released immediately while Aranadhan was detained for nearly two years without any formal charges under the Prevention of Terrorism Act (PTA). As soon as he got out of jail, he went to live overseas, fearing for his safety in Sri Lanka.He ranks among a number of political prisoners who were detained without a hearing. Others were acquitted after being held for as long 15 years.Many detainees claim they were pressed into signing confessions unwittingly or under duress as they either could not understand the language the contract was written in, or feared physical abuse if they refused to cooperate.

Many who were arrested under the PTA complained of physical ill treatment and torture following their arrest.The cabinet approved the Counter Terrorism Act (CTA) on Sept. 11 to repeal and replace the PTA, which was relied on heavily during the long war to crackdown on the activities of the insurgent group.Abolishing the PTA was one of President Maithripala Sirisena’s 2015 campaign pledges. Colombo told the United Nations that year it would repeal the PTA and replace it in line with international best practices, a promise the European Union pressed the government on in 2016.Successive governments in Sri Lanka have used the PTA against rights activists, journalists, and opposition politicians to silence them.Human Rights defender Ruki Fernando said it was unacceptable that changes were being considered to the bill at the parliamentary committee stage, as this would afford no opportunity for public or judicial scrutiny.”The fact that such changes may include problematic clauses such as the admission of (forced) confessions made to the police, and empowering the defense ministry to be the implementing authority, is very alarming,” said Fernando, a member of the Justice, Peace and Integrity of Creation Commission of the Conference of Major Religious Superiors.Fernando and Oblate Father Praveen Mahesan, director of the Center for Peace and Reconciliation, were arrested and detained under the PTA in 2014, along with others.They were treated as suspected terrorists for four and a half years after their arrest.”It is questionable whether we need any counter-terror laws. All around the world such laws grant massive powers to the executive and security sector,” Fernando told ucanews.com.”They also reduce the system of checks and balances put in place to protect people’s liberty, including judicial oversight, and can result in serious rights violations,” he said.”The state has enough power under the Public Security Ordinance and other laws, including the power vested in the judiciary to deny bail to suspects on multiple grounds,” he added.”If needed, clearly defined new offenses could be introduced under the existing legal regime.”Fernando said many political prisoners and their families, mostly Tamil, were subjected to grave human rights violations.”This has led to desperate acts of fasting by some prisoners,” he said.”Under the PTA, some people were detained for 10-15 years before being declared not guilty and set free. Violations include arbitrary arrests, prolonged detention without charge, and torture. This is still going on today,” he added.Rights activists have been calling on the government to repeal the PTA for years, staging numerous demonstrations.Kingsley Karunaratne, the administrative secretary of the Rule of Law Forum, which is affiliated to the Asian Human Rights Commission, said the removal of the admissibility of confessions that may have been made under duress is the most democratic aspect of the new CTA.He said the new act appears to do a better balancing act between protecting people’s liberties and safeguarding national security, but critics question why the country needs such a piece of legislation at this time given that the war ended a decade ago.They say the Public Security Ordinance and ordinary laws already give the state more than enough power to handle the threat of terrorism, whereas the new counter-terror law exceeds this mandate by giving the executive, police and military too much power.Karunaratne has called on the government to publish the bill in its entirety at the earliest possible date before it is heard by parliament so that the public can engage in the debate.”The admissibility of (all) confessions has served as an invitation to endemic torture and arbitrary convictions under the PTA, and the overly broad provisions of that act have had a chilling effect on freedom of expression,” he said.”The wider role the new act gives to the Human Rights Commission and magistrates is commendable,” he added.”The new act obligates the magistrate in each case to visit the suspect in person — thus giving them a chance to communicate directly — and look into their well-being through a private interview. It also states that any comments made by the suspect must be recorded,” he added.”According to the draft, no person shall be held in remand for a period exceeding six months from the date of arrest unless criminal proceedings have been instituted,” said Karunaratne.

ST. FRANCIS OF ASSISI, FOUNDER OF THE FRANCISCAN ORDER, PATRON OF ITALY