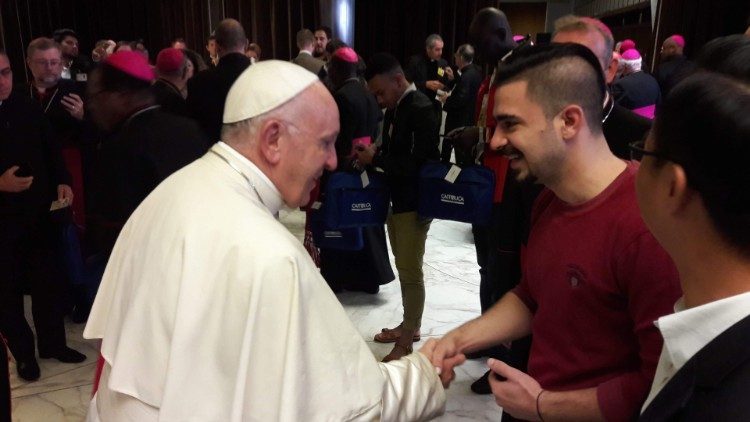 Mr Safa al Abbia is a 26-year-old Chaldean Catholic dentist from Iraq. He was invited to the Synod of Bishops on Young People, Faith and Vocational Discernment currently underway in Rome.

His plea to the Bishops is that the universal Church helps young people in Iraq who are being persecuted for their faith. He explained that the main challenge for youth in Iraq is “peace and stability and their right to live in dignity.”

In his intervention at the Synod, which ended with rapturous applause, he told the Bishops that young people were struggling to remain as faithful witnesses to Jesus and hold onto their traditions, values and liturgy. He said that many of them have watched their brothers and sisters being martyred and their churches bombed.

He also related a painful experience. He said that he will never forget the face of his friends who, after Mass, said, “See you next week”. He never saw them again because they were “burned under the fire of the bombed car” near their church.

He told Pope Francis that he had a message for him from the young people of Iraq: “They hope one day to see you in Iraq.”

He said that he had two important experiences at the Synod: First, that he was able to tell the world what was happening in Iraq because it was important that others knew the inside story. He said he felt supported by many who were at the Synod who heard his story. Second, he discovered that many young people across the world are suffering for different reasons. He mentioned sexuality, social media and the breakdown of family life. He said that it was important because knowing what happens in other places means that young people can support each other in all sorts of ways – including through prayer and by helping people rebuild what has been destroyed

Mr Al Abbia said that he believes that he was really heard at the Synod. He said that after the applause he received in the general assembly, many people came to him and asked how they could help the people of Iraq.

He hopes that the Synod will, in the end, result in an accurate account of reality. He does not want the Synod to be “saying a speech and clapping and support [for] the talk” but a real “positive feedback” of reality on the ground, the lived experiences of many young people.

He says that he had more than one opportunity to speak to Pope Francis. Smiling broadly he says that the first time he met the Holy Father he could not speak because he was so stunned to be standing in front of the Pope. He tells of how, in Brazil, at World Youth Day, they only saw the Pope in the distance. Now he stood before him!

The second time he met Pope Francis he says he asked him to pray for his country in general but also for all the Christians of Iraq and for him and his family.

The Holy Father responded telling him that he would pray for the people of Iraq. Mr Al Abbia explains how, when talking about Iraq, he sees a real sadness in the Pope’s eyes.

At the end of his speech he told the Pope that the Iraqi people, especially young people, hope he will visit the country. He says that the Holy Father laughed when he heard that.

Mr Al Abbia said that his message to the world is to ask for prayer for Iraq. He also says “do not forget us.” He said that he realises that there is a lot of suffering in the world and maybe the attention of the world has shifted to places like Syria. Although the situation in Iraq is a bit better, he says that nothing is guaranteed. “Don’t forget us because we have a wonderful group of young people that are steadfast in their faith, salt to the earth as Jesus said.”

He says that he is afraid that young people in Iraq will lose their faith and become hopeless. This he believes leads to two possibilities: young people leave the Church or immigrate from Iraq. He said that in 2003 there were 1.5 million Christians in Iraq, now there are only 400 thousand. This is a “miserable thing!” He reminds the world that Christianity was in Iraq from the first century.

“It is not possible to say, one day, oh there were Christians in Iraq, no, the Christians have to still be in Iraq. This is the message, we need the world to support us and at the same time we support all the young people around the world and we pray for them and their countries and their families.”

Mr Al Abbia said that in an email he was told that the Synod was a waste of money, that the Vatican brought people from all over the world and that this could have be done through electronic means, like Skype. He said that it was important that people came together in Rome, to share their stories like he shared his. He said that being able to share his story helped him tell the world, for example, about what is really happening in Iraq.

He said that it was important that the Church listened to young people and then responded. He adds, “but we need a fast response.”

Mr Al Abbia had to return to Iraq soon after doing this interview. His mother is unwell and he needed to be with her. He told Vatican News that he could not come back to the Synod of Bishops on Young people because his visa only allowed him one entry into the EU.

Synod of Bishops: “How difficult it is to find dawn in twilight”