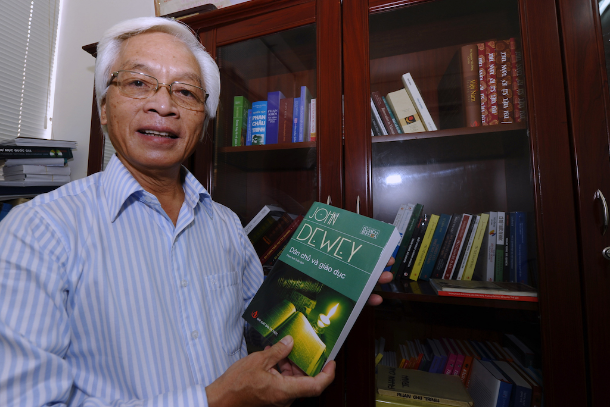 Intellectuals and veterans in Vietnam have given up Communist Party membership to defend the head of a publishing house who was rebuked for printing books diverging from the party’s political line.The party’s Central Inspection Commission concluded on Oct. 25 that Chu Hao, director of Hanoi-based Tri Thuc Publishing House, was responsible for “publishing some books which have content against viewpoints, policies and guidelines of the party and state.”The commission, which examines party members’ activities, said authorities had seized and withdrawn those books from circulation and that Chu Hao would be disciplined.Chu Hao, former deputy minister of science and technology, was also accused of violating party regulations with writings and speeches that went against party rules. “He has already degraded his political thoughts, morality and lifestyle,” the commission said.He described the commission’s conclusion as “groundless and malicious, aiming to threaten me and those who have the same interests.”Chu Hao, who joined the party 45 years ago, said he had renounced the party and would work for the nation, democracy and development through educational and cultural activities.Vietnam’s Communist Party, which was established in 1930 and started to control the whole country in 1975, has an estimated 4 million members.At least 13 intellectuals and former government officials have officially disowned the party to support Chu Hao’s cause.Nguyen Ngoc, a famous writer who joined the party in 1956 because of his patriotism and national liberation, said he had abandoned the party because he could not stand for an arbitrary organization which destroys the country and betrays the people.Nguyen Ngoc, who works closely with Chu Hao in social activities, said his close friend makes a great contribution to giving readers fundamental knowledge that “we must know and understand if we really want to build a civilized and advanced nation.”Chu Hao has had many highly influential political books by foreign writers translated into Vietnamese and published.”Disciplining Chu Hoa is an obscurantist act leaving people in the dark to fool and quash them for the self-benefit of the totalitarian party,” Nguyen Ngoc said.The 86-year-old war veteran said the commission’s vilifying conclusion also aims to crack down on patriotic intellectuals who act in all conscience.On Oct. 27, Bishop Paul Nguyen Thai Hop of Vinh, head of the episcopal commission on justice and peace, Father John Baptist Huynh Cong Minh, former vicar-general of Ho Chi Minh City Archdiocese, and some Catholics were among 155 intellectuals and government officials who petitioned the Communist Party to withdraw the false accusation against Chu Hao.Petitioners also called on the government to ask other state-run publishing houses to follow Tri Thuc Publishing House’s example by raising public awareness of education to develop the nation