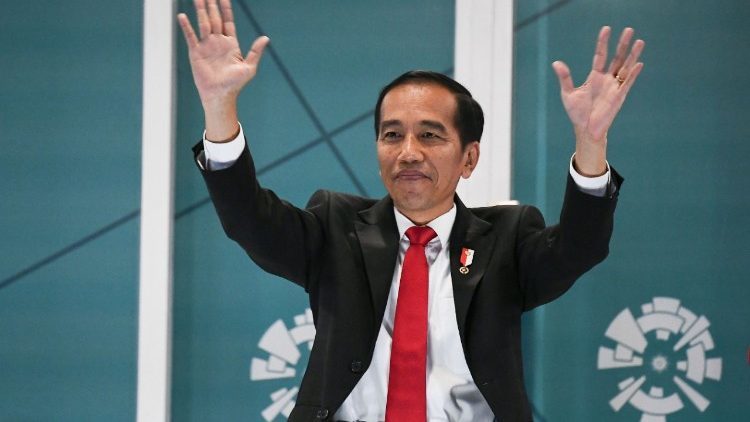 Indonesia president is appealing to the nation’s Catholics to help preserve the nation’s diversity and unity.  Joko Widodo  paid his first visit as president to the headquarters of the country’s Bishops’ Conference of Indonesia (KWI) in Jakarta on Friday to improve ties with the local church and to stress the need for religious institutions to preserve and maintain diversity within the nation.

Widodo, who came to power in 2014, was welcomed by KWI president Archbishop Ignatius Suharyo of Jakarta, secretary-general, Bishop Antonius Subianto Bunjamin of Bandung and 8 other bishops.

During the meeting that lasted more than an hour, each bishop brief the president on issues affecting their dioceses.

“In the meeting, I talked about issues related to the Pancasila [the 5 principles on which state is based)  as well as diversity especially in terms of religion, ethnicity, customs and traditions that we must continue to maintain,” Widodo later told reporters.

“We must maintain our brotherhood, harmony and unity,” he said.

Archbishop Suharyo told UCANEWS that president Widodo’s visit was “to build friendship” and had “nothing to do with the presidential election,” next year.

General elections in Indonesia are scheduled for April 17, 2019, and for the first time the president as well as members of the People’s Consultative Assembly will be election on the same day.

Widodo is confident of securing a second term in office.

Archbishop Suharyo said, “There was no specific issue raised by the president during the meeting.”  “He just wanted to hear directly from Catholics [about problems they are facing].”

According to him, the visit was Widodo’s first as president. He had visited the conference’s headquarters twice while he was Jakarta’s governor from 2012 until 2014.

“If it really happens, then the noble values the Indonesian people live by will be recognized by the international community,” he said, referring to diversity and secularism enshrined in the constitution.

Bishop Leo Laba Ladjar of Jayapura said the president stressed the need to maintain diversity“because religious identity has become a big issue particularly ahead of the presidential election.”

The world’s largest archipelagic state with a myriad of ethnic groups, religions, languages and flora and fauna, Indonesia is also home to the world’s largest Muslim population.   The nation has long been an example of peaceful harmony, tolerance and unity among its people, thanks to the Pancasila.

The vast majority of Indonesian Muslims are moderates, but the nation’s image as a tolerant nation has been undermined by Islamic radicalism and intolerance in the past several years, threatening its unity amidst its diversity.

In his address to the nation on the occasion of the Indonesia’s Independence Day August 17,  Widodo urged all to embrace its founding spirit of tolerance. Those who fought for independence, he said, have triumphed because they rejected political, ethnic, religious or class differences.

On August 18, the day after Independence Day. Widodo inaugurated the 18th Asian Games that is being staged in Jakarta and Palembang until September 2.  Indonesia’s bishops have backed the continent’s premier sporting event as an occasion to build peace among people