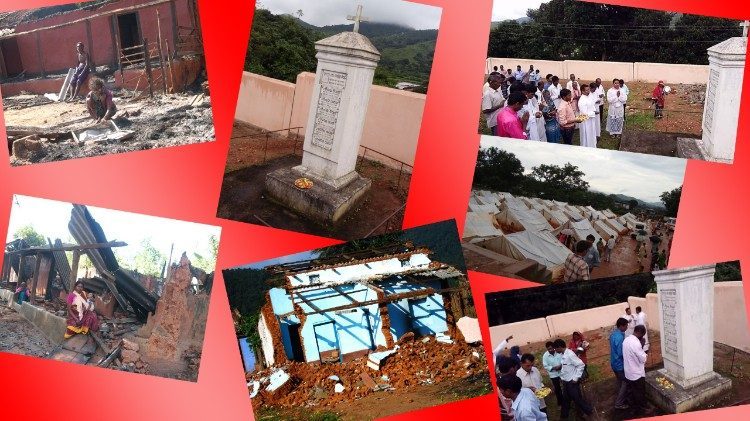 The Archdiocese of Cuttack-Bhubaneswar in eastern India’s Odisha state is currently gathering information and evidence on the martyrdom of some 100 people who were killed in the brutal anti-Christian violence that erupted in the state on August 25, 2008.

The initiative is taking place 10 years after Hindu extremists unleashed untold atrocities on Christians, mostly in Kandhamal District, blaming them for the August 23 murder of Hindu leader Swami Lakshmanananda Saraswati and four of his disciples.

Even though Maoist rebels claimed the assassination, the carefully orchestrated violence continued unabated for months.

The violence displaced an estimated 56,000 Christians.  Many who sought shelter in the forests perished because of hunger and snakebites. Church and social activists reported the destruction of almost 300 churches, besides convents, schools, hostels and welfare facilities.

In a letter on December 3, 2017, Archbishop John Barwa of Cuttack-Bhubaneswar appointed Father Purushottam Nayak to research and prepare a dossier on the martyrs, a process before formally initiating the cause of their martyrdom and sainthood at the diocesan level.   After the diocesan process, the cases will be handed over to the Vatican for further examination and verification.

Fr. Nayak, who is based in Raikia, took up his mandate on 1 January, 2018. He told Vatican News that he has drawn up a list of 105 martyrs among whom are 7 Catholics.  The list inclues Christians of other denominations as well as Hindus, Muslims and others who were killed just because they helped, sheltered or defended their Christian brothers and sisters.   He said that the archdiocese plans to honour non-Catholics and non-Christians in appreciation and recognition for sacrificing their lives for their Christian brothers and sisters.

Fr. Nayak is heading a 7-member team, all priests including him, in this task of gathering evidence on the martyrdom.  His team follows a prescribed procedure in gathering information.  This includes a critical biography of the martyr candidate, a report on the virtues , such as faith, hope charity and generosity, reports on holiness and favours received, if any, through the candidate’s intercession  and any possible obstacle to the cause.  The team also has to gather information on all public writings on the candidate or his/her martyrdom and make a list of witnesses , both favourable and not favourable to the cause of martyrdom.

The main sources of evidence for Fr. Nayak and his team have been eyewitnesses, family members and relatives, whose interviews are recorded and documented to find out the motives behind the killings.

Fr. Nayak said that the practical difficulties they face in gathering information is locating the victims who have been displaced and scattered after the 2008 persecution.  The team tries to reach out to them through relatives, parish priests, catechists and lay people.

Many of the victims’ families, Fr. Nayak said, are still traumatized and the deep wounds that they suffered in 2008 are still fresh in their memory.  Many are reluctant to talk freely, as they are frightened of repercussions living among Hindus in alien surroundings far from their own their homes and villages.

Honouring other Christians and non-Christians

Fr. Nayak’s team has documented only 15 cases of martyrdom so far, out of which 7 are Catholics.   They were to complete their job by the end of this year, but the priest said it appears very difficult to finish the remaining 90 cases in 3 months, so they will need more time.

Fr, Nayak said the archdiocese already has a martyrs’ memorial in Tiangia, the worst affected by the 2008 violence, where 7 Catholics perished, the highest from a single place.  Cuttack-Bhubaneshwar Archdiocese also plans to have a memorial for the martyrs of other Christian denominations and Hindus