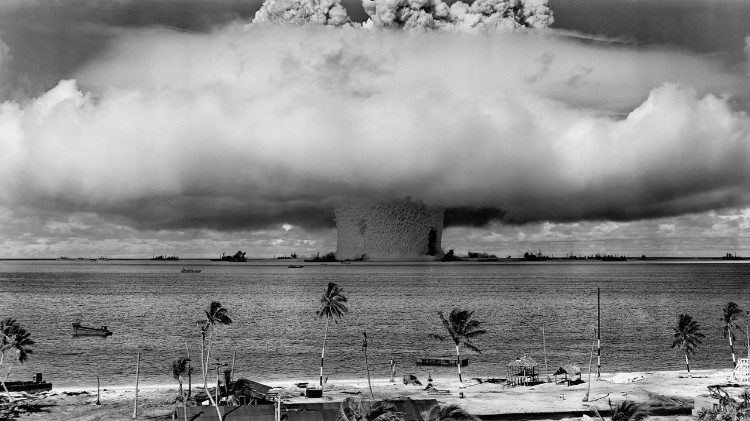 The Holy See has once more expressed grave concern over the catastrophic humanitarian and environmental effects of the use of nuclear weapons , and called on all governments of states who adopted the United Nations Treaty on the Prohibition of Nuclear Weapons (TPNW) to sign and ratify it.

Speaking on behalf of Archbishop Bernadito Auza, the Holy See’s Permanent Observer to the UN in New York,  Second Counsellor, Father David Charters made the call in an address on Monday at a UN General Assembly discussion on nuclear disarmament.

The TPNW, or the Nuclear Weapons Ban Treaty, that prohibits the use, threat of use, development, testing, production, manufacturing and possession of nuclear weapons, will enter into force when 50 states have signed and ratified it.

Fr. Charters warned that a nuclear war or even a limited use of nuclear weapons would be a catastrophe of unimaginable proportions, and would kill untold numbers of people and cause tremendous environmental damage and famine.

The Holy See official pointed out that the continued existence of over 14,000 nuclear weaponsheld by a handful of countries is one of the greatest moral challenges of our time.  Fr. Charters said that the Catholic Church has been opposing nuclear weapons since 1943.

St. John XXIII called for its ban in his encyclical “Peace on Earth” and the later popes have consistently called for the “abolition of these evil instruments of warfare that create both a false sense of security and foster distrust and disharmony”.

Fr. Charters pointed out that the Second Vatican Council condemned nuclear arms race as “an utterly treacherous trap for humanity, and one that injures the poor to an intolerable degree.”

Fr. Charters noted that maintenance of nuclear weapons continues to siphon off immense resources that could be devoted, among other things, to the implementation and achievement of the Sustainable Development Goals, especially the eradication of extreme poverty and hunger.

The Holy See the concern of Pope Francis according to whom “nuclear deterrence and the threat of mutually assured destruction cannot be the basis for an ethics of fraternity and peaceful coexistence.”

Pope’s Angelus in Lithuania: fight temptation to dominate by serving others