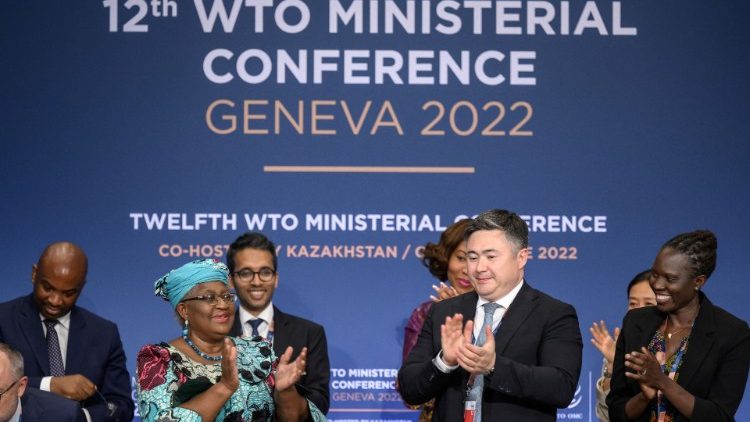 Addressing the 12th Session of the Ministerial Conference (M12) of the World Trade Organization (WTO), the Vatican Permanent Observer to the UN Office and Other International Organizations in Geneva calls for a renewed cooperation and solidarity to overcome the global crises the world faces today.

The Holy See has reiterated the importance of multilateral dialogue in trade issues and the urgent need for a holistic approach founded on the promotion of the common good in a common home to tackle the many crises facing the world today, including the on-going impact of the COVID-19 pandemic, war in Ukraine and climate change.

The Vatican Permanent Observer to the United Nations Office and Other International Organizations in Geneva, Archbishop Fortunatus Nwachukwu, insisted on these points during the 12th Session of the Ministerial Conference (M12) of the World Trade Organization (WTO).

Items discussed at the Conference

The Conference reconvened at the organization’s headquarters in Geneva, Switzerland, from 12-16 June, five years since its last gathering in Buenos Aires, Argentina. It was originally due to take place from 30 November to 3 December 2021 but was postponed due to the outbreak of the Omicron variant of COVID-19, which led to the imposition of travel restrictions and quarantine requirements in Switzerland and many other European countries.

The Ministerial Conference, which is attended by trade ministers and other senior officials from the organization’s 164 members, is the highest decision-making body of the WTO and usually meets every two years to take decisions on all matters under any of the multilateral trade agreements.

Revitalizing the WTO and its multilateral approach

In his intervention, Archbishop Nwachukwu emphasized that urgent action is needed to revitalize the WTO and its multilateral approach to face the current world challenges following the COVID-19 crisis which have been seriously aggravated by the current war in Ukraine, noting that the spirit of fraternity that reemerged at the beginning of the pandemic, has soon given way to an individualistic approach that “translated into economic policies and ideologies that defend the absolute autonomy of the marketplace and of financial speculation instead of seeking the common good”.

“Only the multilateral trading system offers States the opportunity of participating in developing a juridical-economic system for a fuller understanding among peoples, and for social and economic development, especially of the poorest countries. If we really want to build a healthy world economy, what is needed at this juncture of history is a holistic approach founded on the promotion of the common good in a common home with common horizons.”

The Vatican Observer went on to speak about trade and environment, referring specifically to the needs of LDCs which are different from the ones of developed countries. Noting that trade policy has a consequential, but limited scope in contributing to and managing a global green growth agenda, Archbishop Nwachukwu suggested as a possible way forward a limited climate waiver of WTO trade and environment rules combined with a ‘peace clause’ for disputes on trade-related environmental measures of developing countries.

“Our focus must remain strong and we must remain unwavering in our commitment to leaving no one behind and to building a more sustainable world by 2030.”

Referring to the current COVID-19 crisis, Monsignor Nwachukwu reiterated the Holy See’s stand for WTO member States to work together to ensure that intellectual property rights “do not create any barrier to the timely access to affordable and safe medical products, including vaccines and medicines, or any hindrance to scaling-up of research, development, manufacturing and supply of medical products essential to combat COVID-19”.

In this regard he said the Holy See welcomes the formal and informal negotiations that have taken place over these past months, in an effort to arrive at a compromise solution to the intellectual property aspects relating to the WTO response to the pandemic, warning however that it “it is essential to ensure that any compromise be effective, comprehensive and implementable”.

“Access to essential medicines no longer represents a challenge just for the Least Developed and other developing countries; it has also become an increasingly urgent issue for developed countries.”

Another item discussed during the M12 was that of fisheries. The Nigerian prelate said the Holy See welcomes the progress that has been made on coming to a consensus on Fishery Subsidies, after two decades of discussion on the matter, reiterating the need “to take concrete actions for disciplined production and export-distorting fishery subsidies, as well as subsidies that contribute to overfishing and illegal, unreported and unregulated fishing activities, while ensuring the exemption of LDCs from any reduction commitments that are not consistent with the level of their socioeconomic development”.

Finally, Archbishop Nwachukwu referred to the discussions on the Agreement on Agriculture, saying the Holy See considers the removal of its existing limitations, imbalances and asymmetries to be a “priority in light of the right-to-food imperative”.

“Integration of the Developing countries and LDCs in global food value chains is a key requirement for ensuring food security and economic development in today’s globalized world.”

Devastating effects of war in Ukraine

In this regard, he expressed the Holy See’s deep concern for the devastating effects on the poorest countries of the increase in the prices of food and raw materials caused by  the Russian-Ukrainian conflict, which, he said, “threatens to generate new tensions of a social nature due to the scarcity of food, especially for the poorest strata of the population”.

Wrapping up his statement, the Vatican Observer reiterated the Holy See’s call for “renewed cooperation and solidarity, inspired by a sense of human fraternity”. “If we fail to deliver an ambitious meaningful post-MC12 Agenda, we will not lose just another opportunity, but the role and the credibility of the WTO itself will inevitably be questioned”, he concluded.