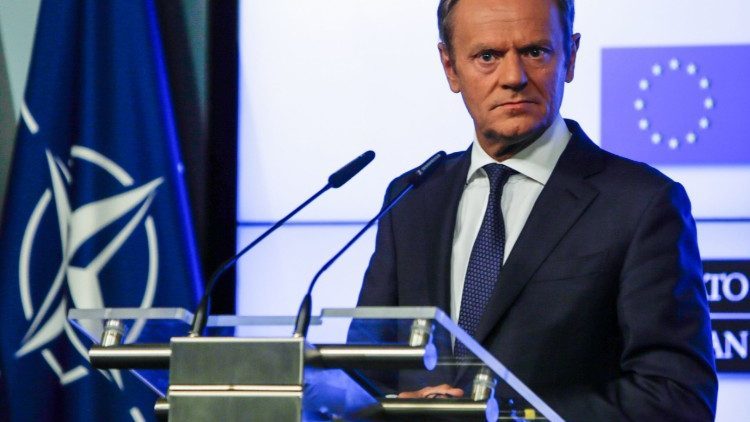 One of the EU.s most senior leaders has urged US President Donald Trump to remember who is his friend when he meets Russian President Vladimir Putin next week.

European Council President Donald Tusk directed a message at Trump he signed a joint declaration of the EU and the NATO military alliance in Brussels with alliance Secretary-General Jens Stoltenberg.

NATO has been struggling to put on a display of unity for a two-day summit at its new headquarters, amid deep divisions among member states over Trump’s policies on trade and his decision to withdraw from the Iran nuclear deal and global climate agreement.

Trump has routinely criticized his NATO allies for failing to spend enough on their defense budgets, and he is likely to repeat
his demands for more money in Brussels on Wednesday.

But Tusk had a warning for him. “Dear President Trump, America does not have and will not have a better ally than Europe,” Tusk said at the EU-NATO event. “Today Europe spends on defense many times more than Russia and as much as China. And I think you can have no doubt, Mr. President, that this is an investment in common American defense and security, which can’t be said with confidence about Russian and Chinese spending,” he added.

Tusk urged: “Dear America, appreciate your allies, after all, you don’t have all that many.”

When the leaders of NATO meet on Wednesday, the small Balkan nation of Macedonia hopes ut will be invited to join.

Macedonia has reached a deal with Nato member Greece to unlock its path to membership of both the military alliance and the European Union.

Once it changes its name to the Republic of North Macedonia accession talks can begin. But that will have to take place via a referendum a and constitutional change in the former Yugoslav republic and by a parliamentary vote in neighboring Greece.

Pope Francis sends condolences to the victims of flooding in Japan