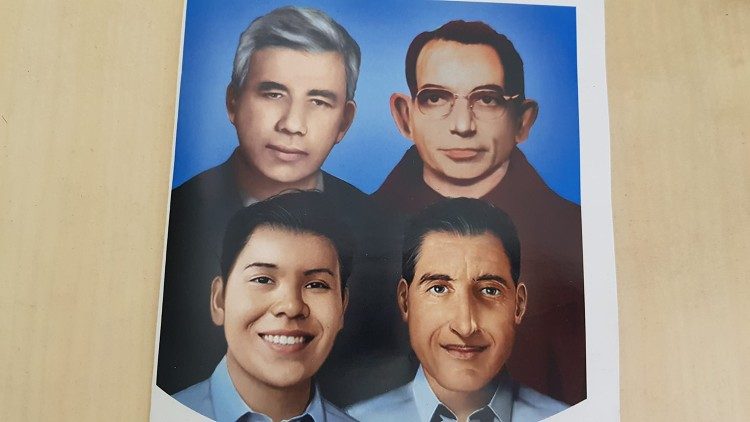 Jesuit Father Rutilio Grande, two laymen and Franciscan missionary Father Cosme Spessotto are being beatified today in San Salvador. A close friend of St. Oscar Romero, Father Rutilio Grande, SJ, was killed by a paramilitary death squad in 1977 for speaking out for social justice. Father Pessotto was murdered for the same reason in 1980, during the civil war.

After celebrating the sainthood of Archbishop Oscar Romero in 2018, the Church in Salvador welcomes today four new Blessed who were martyred during the country’s civil war in the 1970s and 1980s for speaking out for the poor.

Jesuit Father Rutilio Grande, a friend of St. Romero, two laymen, Manuel Solórzano and Nelson Rutilio Lemus, and Franciscan Father Cosme Spessotto will be  beatified in San Salvador by Cardinal Gregorio Rosa Chávez, representing the Holy Father. The livestreamed celebration will take place at 5:00 pm local time in the  Plaza Divino Salvador del Mundo and will be attendend by some 6,000 people.

Killed for speaking out for the poor

Father Grande was gunned down by a paramilitary death squad along with Manuel Solórzano, an elderly catechist, and teen-age Nelson Rutilio Lemus, on March 12, 1977, while travelling from Aguilares to El Paisnal for a novena.  Their funeral Mass was celebrated by St. Oscar Romero when he was archbishop of San Salvador. He too was martyred three years later, while celebrating Mass on March 24 1980. Father Spessotto died in similar circumstances just a few months later: he was shot at point-blank range on June 14, 1980. The Italian-born missionary had been serving in the Diocese of Zacatecoluca and spoke out against social and economic injustice just as Father Grande and Archbishop Romero did.

Both priests tried to build a sense of community for the poor in the country, who often were exploited by the oligarchy. But their messages were considered political both by the military and local elites, including some conservative bishops, who chose not to spread the social teachings of the Second  Vatican Council that told Catholics to care for the poor and marginalized.

Jesuits rejoicing with the  Church in Salvador

In a video message, Father Arturo Sosa, SJ, Superior General of the Society of Jesus, remarked that by recognizing the martyrdom of Father Rutilio, Manuel, Nelson and Father Cosme, “the Catholic Church confirms that their lives were taken because of their faith of which they became witnesses by shedding their blood”. “These four people were united by their faith in Jesus Christ, which led them to love and serve the people to which they belonged”, noted Father Sosa, saying Jesuits across the world join in rejoicing with the Catholic Church in Salvador for their beatification.

A symbol of the Salvadoran people

According to Father Rodolfo Cardenal,SJ,  Father Grande’s friend and biographer, they are a symbol of the Salvadoran people, who have never seen complete justice for the atrocities committed during the civil war.

Father Rutilio Grande was born in 1928 to a poor family in El Paisnal, the same Salvadoran city where he would later serve as a priest. He was ordained in 1959.

The vision of an “outgoing” Church

During his Jesuit formation Father Grande studied in Venezuela, Ecuador and Europe, but never forgot his roots. He was particularly influenced by Latin American bishops’ Medellín documents, which laid out how the bishops hoped to respond to calls of the Second Vatican Council. For Father Grande implementing the vision of Medellín meant helping the poor farm workers improve their living and working conditions, but also promoting an inclusive liturgy which insisted upon the widest and deepest lay participation possible at that time hearing the community”. This  vision corresponds today to the “outgoing Church” open to the “peripheries” and the vulnerable envisaged by Pope Francis.

The civil war in El Salvador

When religious and priests like Rutilio Grande took the side of the poor, the backlash from the military and the oligarchy was brutal. Death squads commissioned by them tortured and executed hundreds of campesinos. Father Rutilio, Manuel Solórzanom and Nelson Rutilio Lemus, were assassinated in this context. His death and legacy deeply marked  the successive magisterium of St. Oscar Romero and sparked the Archbishop’s bold stance against the Salvadoran government,  leading to his  assassination, also by a right-wing death squad, in 1980.

During the 12-year civil war in El Salvador, which ended in  1992, over 20 priests,  four nuns and hundreds of catechists were killed. One of the bloodiest massacres occurred in 1989 when 8 people, including 6 Jesuits, were murdered in Central American University of El Salvador (UCA).

African prelates devising innovative ways of making the synod accessible to the faithful.