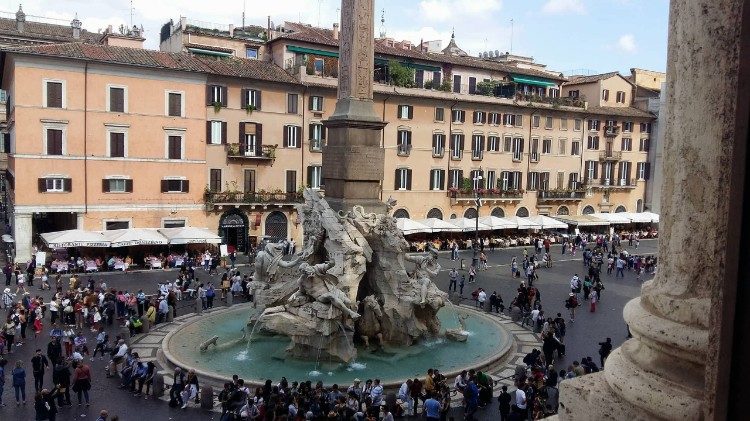 As the Week of Prayer for Christian Unity draws to a close, Christians of different traditions have gathered in Rome for various services thanks to Rome’s ecumenical centre, Centro Pro Unione.

During this annual Week of Prayer for Christian Unity, believers of different traditions are gathering throughout the world to pray for the unity of all Christians. Rome has hosted numerous ecumenical services in recent days, thanks also to the Rome-based Centro Pro Unione.

Last Thursday, the Centro Pro Unione and the Lay Centre at Foyer Unitas held its annual service, both in presence and online, among the various activities being organized. The Centro Pro Unione based in the heart of Rome is a centre for ecumenical research and encounters, founded shortly after the Second Vatican Council in 1968. It’s run under the direction of the Franciscan Friars of the Atonement and headed by Father James Puglisi, a professor of ecumenism and having served on several international dialogue commissions.

Thaddeus Jones caught up with him as the Week of Prayer for Christianity got underway, and asked him about the this year’s celebrations, starting with theme and materials for the Week prepared by the Middle East Council of Churches. The selection of scripture and liturgical texts is inspired by the visit of the Magi to the newborn King, as described in the Gospel of Matthew, “We saw His star in the East and we have come to worship Him”

Looking at the Week of Prayer for Christian Unity 2022, how would you characterize this year’s annual celebration?

In terms of the participation here, in Rome at the various celebrations, is there anything you’d like to note in particular?

Well, because here in Rome and in Italy and probably in other places we are having a surge of the virus again, so a lot of services have been reduced to half presence and online…And I think people feel that there is a real need to come together now, because we’ve been so detached because of this pandemic situation that we see people wanting to participate, the need to pray, and praying for the unity which we miss from being able to be connected with one another. So, I think this year’s Week of Prayer takes on a stronger emphasis of this need to be together, to unify to praise the Lord, but also to support one another in this time of crisis.

Would you say that one of the outcomes from the pandemic is there’s more of a focus on the essentials, of our being united as Christians?

I would certainly say that’s true, but also the fact that we need to listen to the Lord in this time of crisis and respond with our prayer.

Looking at the work in ecumenism and then Christian unity in general, how would you characterize where we are today in this common desire for greater unity among Christians?

I think because of Pope Francis’ involvement and giving a new twist on how we approach the question of ecumenism, it’s not just a series of theological discussions by experts any longer. It is now the attempt for us to, as he says, walk together, pray together, work together. In other words, that we get to know each other together. I just go back to something that Father Congar said during the Second Vatican Council. You know, at our ecumenical center at Piazza Navona, the Centro Pro Unione, there were many meetings, almost weekly meetings of the invited guests and the Catholic experts that were there. And Father Congar said that because of that experience we come to realize how ignorant we are of one another. And ignorance causes fear and fear blocks any kind of relationship. So, Pope Francis has, I think, taken that to break down the walls that separate us by taking the risk of going out to meet one another, to do things with one another, to pray together, to minister together, to work together. And I think this is something which has given extra energy to the ecumenical movement. So, we see, it’s not just  a movement of those experts or theologians appointed by the Churches to try to find solutions to the problems that have separated us, but also the work of all the baptized to seek the unity of the Body of Christ to which we are called. And I think this theme this year –  we have seen His star and coming from many directions to the one source of light – is really a very symbolic and a very existential reality of what Christian unity is today, the need for this today.

Turning to the Centro Pro Unione, tell me about the work of the Centro and where you have come in this work over these years.

The Centro has existed now since 1968, right after the Second Vatican Council. It was founded to be a place of encounter, but a place of formation. And so, this explains our activities of educational, pastoral as well and also intellectual. The Centro cooperates, for example, in this city with the three other realities that are ecumenical, the Lutheran Reform Center, the Methodist Center, and the Anglican Center in Rome, as well as our participation with other ecumenical centers throughout the world, for example, the center in Strasbourg, the Ecumenical Center at Geneva, and the Ecumenical Institute in Bose, the University of Salamanca. So, the Center has been not only a clearinghouse for information, but also a center of formation of pastoral agents, both internationally and locally. Our ministry continues with a series of lectures that we have every year with an annual summer school, three weeks, from the last week of June to the two first weeks of July. It is an introduction to the ecumenical and interreligious movements from a Catholic perspective and many other encounters that we are engaged in. For example, on Friday, we have an Anglican seminary from United States that will come and spend the morning with us. On Monday we have the Ecumenical Institute from Bose involving students from all over the world that will come that we have every year. So, our activities are ones of the formation, intellectual, pastoral, and spiritual, as well as providing a very highly specialized library, which also keeps track of all the official international theological dialogues between the various churches.

Would you say this need for formation and getting to know one another goes both from the hierarchical levels as well as down to the grassroots?

Yes, it’s the whole body of Christ. It’s those who are ministers, those that are the baptized, those that are ministries within the Church. For example, the formation of seminarians with an ecumenical understanding is fundamental because they will be the people who are ministering to the people of God in their locations, but not only those within the Catholic Church, but also the communities that are surrounding them, so that we don’t live in isolation, and we see that the mission of the Church goes beyond ourselves. Pope Francis keeps saying that the mission of the Church is to go out into the world, to go out of itself, not to be an egocentric reality, but to be a mission-centric reality.

In all these years, what would you describe as some of the most hopeful signs you’ve seen in this work for Christian Unity?

I think some of the hopeful signs is to see that for example even in the city of Rome, the Pope’s diocese, there is much more openness and much more a willingness to get to know who our brothers and sisters are, Christians who live in our same neighborhood. For example, we begin to take route in a very pastoral, fraternal way where we live. I’ve seen this happen also with groups that have come that have for example a stereotype of the Church of Rome, a stereotype of the Catholic Church. When you say the Catholic Church, everyone thinks of the Vatican, but there’s a local Church here in Rome of which our bishop happens to be Pope Francis. Also, the thrill for us being in Rome is to introduce people to the Paleo-Christian roots of this church, which is a church formed, not only of Jewish Christians, but also gentile Christians from the very beginning. It’s a church of Peter and Paul. So, we see in the life of this local church, this desire for unity, this desire for  emphasizing our diversity as a gift of the Holy Spirit. So, to see people realize that and to come to see that the Roman Church is also a Church made up of men and women who struggle with the same struggles that other local churches have. I think we found excitement of discovery of one another again. To go back to what Father Congar said, that we are still living out of an ignorance of one another, and we don’t know much about each other. I think this is beginning to break down and we’re so very pleased that the Centro can be an intimate part of that sharing experiences not only from the Catholic Church, but also what we have learned from others.

Cardinal Czerny calls for prayers and solidarity with Tonga